Chef Cyrille Soenen Helps You Cook for Two (or More) 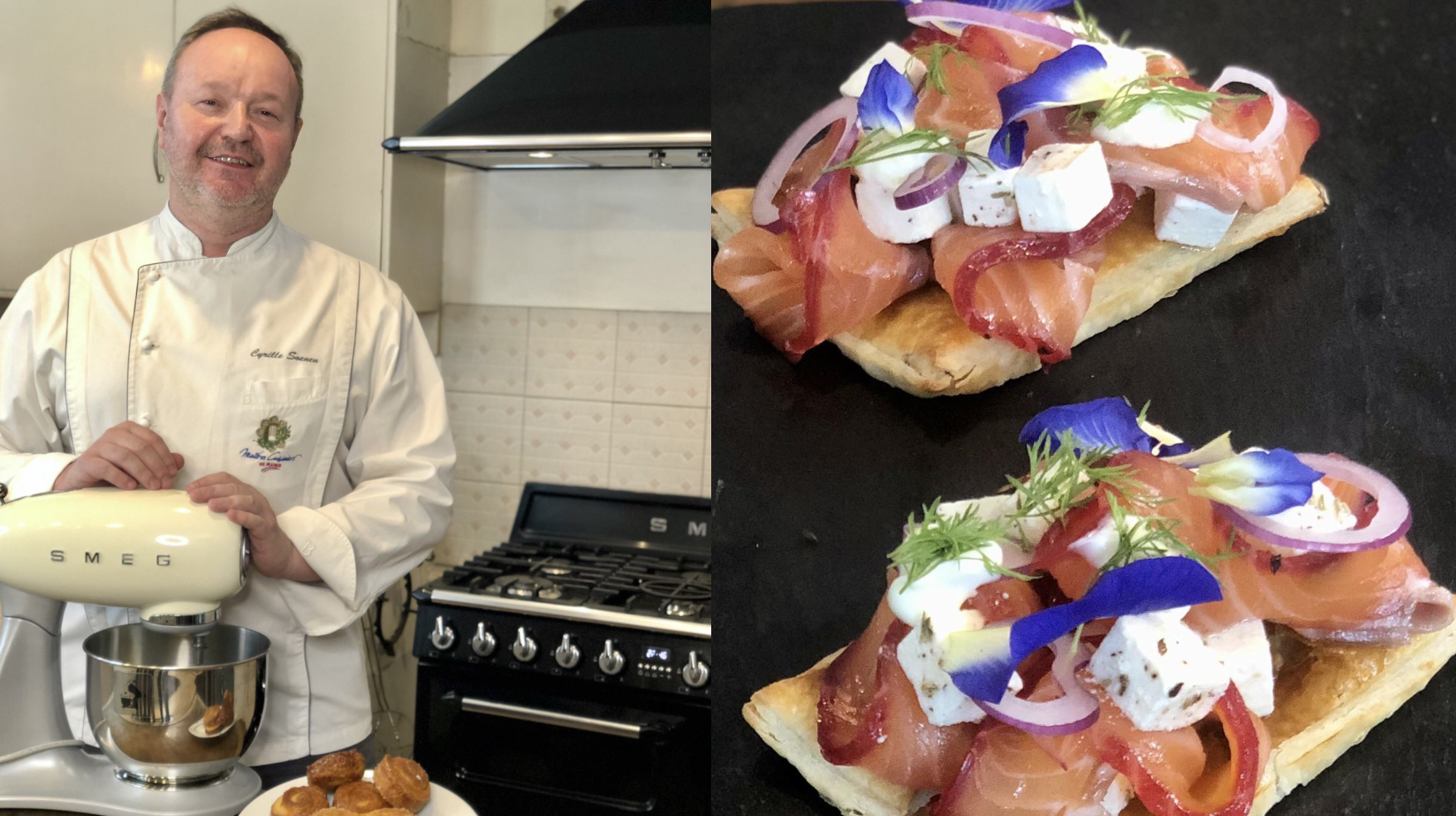 Chef Cyrille Soenen Helps You Cook for Two (or More)

Like many of us, chef Cyrille Soenen has been working from home since the quarantine was implemented in March. He opened a little enterprise he calls CiÇou à la Maison. CiÇou (pronounced see-sue) is his nickname.

He started by accepting orders for his famous Kouign Amann then expanded his menu to include other items from his native French cuisine. Foie gras terrine, pâtés en croûtes, and CroNaps (a hybrid of a croissant and the Bacolod delicacy, napoleones) are just a few of what he regularly dispatches from his kitchen.

He also caters to online parties and offers packaged meals a notch higher than what’s commonly around. CiÇou à la Maison has a standard set menu or chef can come up with any combination of courses based on client requests. He has a steady crowd of regulars familiar with his specialties, having followed his culinary journey from helming Hotel Intercontinental’s Prince Albert Rotisserie, Resorts World’s Impressions, Dusit D2’s D’Origine at The Fort, and his own Restaurant CiÇou and Brasserie CiÇou. 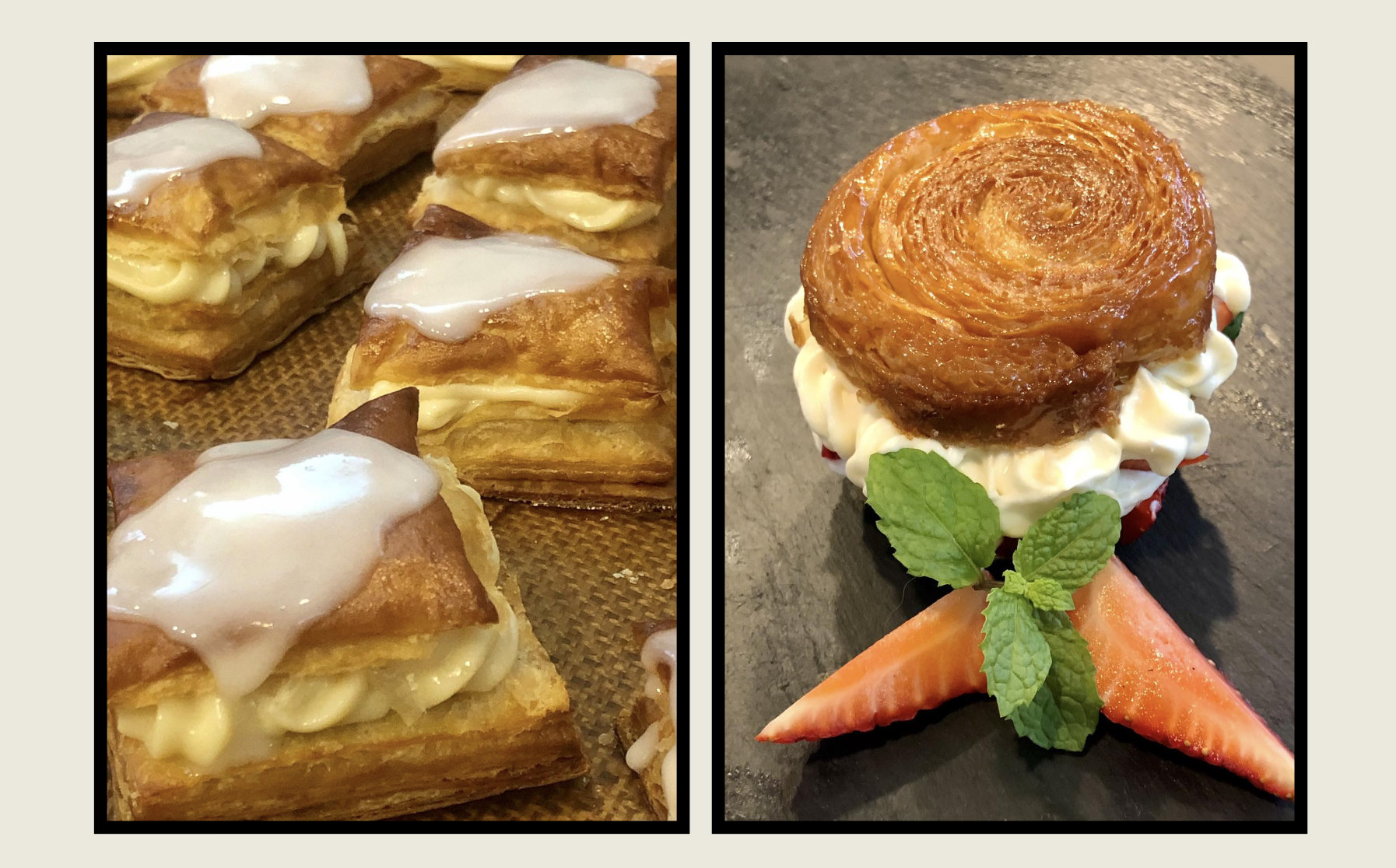 Sometimes the home that chef Cyrille works from is not his. Now and then, he is invited to do private dinners. “I go to the client’s residence and I do the last steps there - the plating, and what needs to be cooked à la minute. But I do all the mise en place at my house,” he explains.

No doubt his kitchen has been extra busy the past months. And the piece of appliance that is hustling the hardest is his black Smeg range cooker, a 6-burner with three ovens. “It’s really used a lot and it happens quite often that we use all the ovens at the same time. The one on top, I use for pizza or bread. The one on the side, I use for reheating, to keep things at a certain temperature, and for slow cooking or gratin. The middle is usually for roasting, like beef,” he enumerates. “The ovens are my favorite. It’s complete and when you set the temperature, it’s really the temperature. Sometimes in some ovens, you have to play around, like you have to put it at 100 to make sure that it’s 80 degrees, you lose time calculating. But with Smeg, if you put 150, it will be 150. You turn the knob, it’s there. It’s really really good,” he attests. 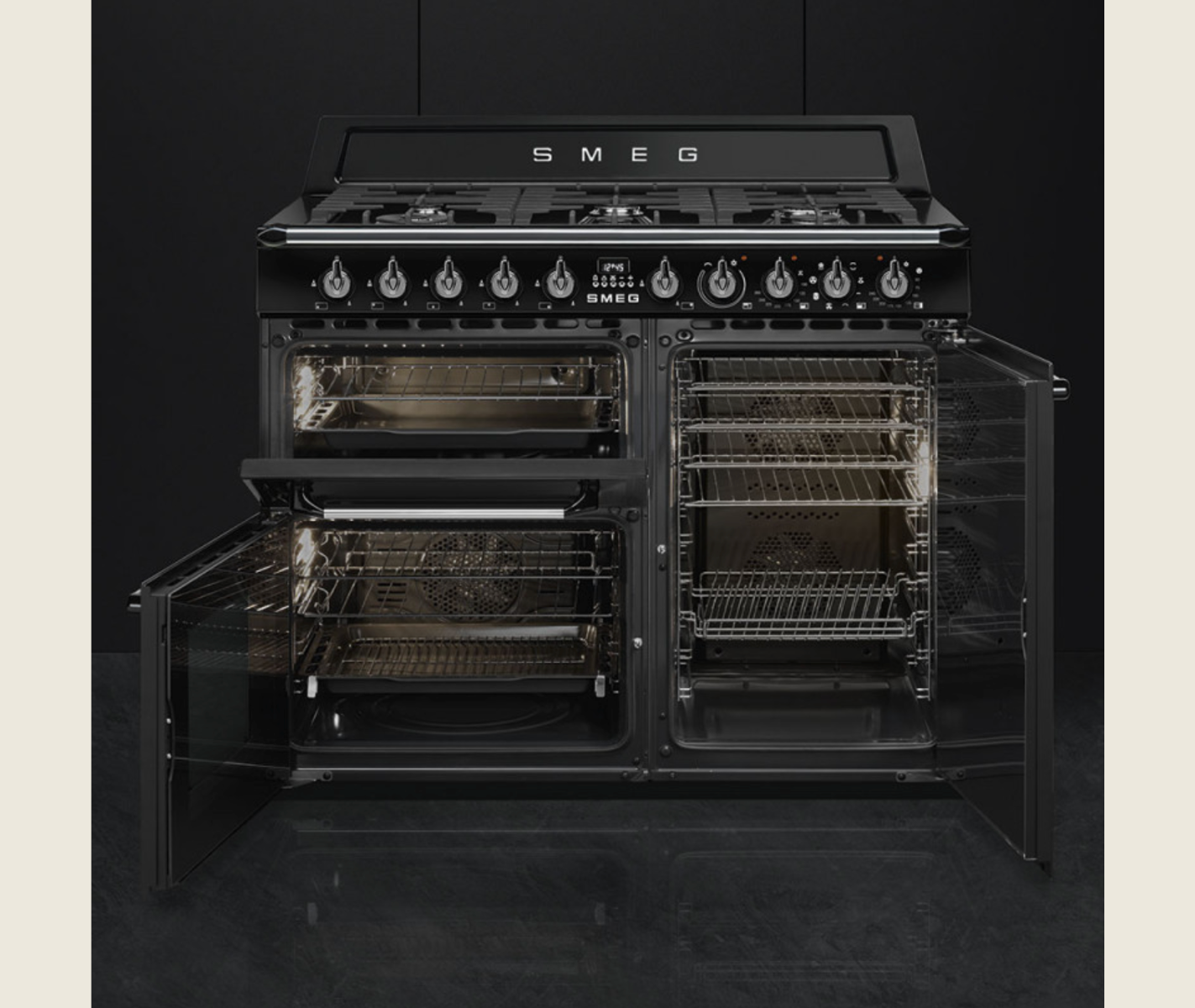 He also appreciates how the burners come in four different sizes. “I have different sizes of pots and pans and when you cook, it’s very important that your pan fits properly on the burner. You’re not going to put a small pan on a big burner because it will mean using more gas plus you will burn your pan on the side, and you don’t want that. When you cook, you want the fire to be in the middle. So with the different burner sizes, I can play around, it gives me options.”

His range cooker is more than five years old and he has zero complaints about it. “We’ve never had problems with it, I’ve never had to call Smeg because there’s something wrong. Of course, we take care of it, we clean it properly,” he shares, pointing out that he also likes the vintage design. “It’s beautiful, it reminds me of the one I had in France. Everybody who comes to the house and sees our kitchen says they love it, they always tell us it looks fantastic,” he relates.

Chef Cyrille’s Smeg range cooker is from Smeg’s Victoria line, which reflects Smeg’s signature 50’s style. It coordinates perfectly with the other Smeg pieces that he owns such as his cream-colored stand mixer. “Every day I have something inside my stand mixer. It’s very solid, I do not feel like I have to let it rest after operating it for a long time. It can be used heavy duty. The rate that I am cooking at home now is like in the restaurant, and the Smeg stand mixer can do the job.” For fresh pasta, he uses the pasta roller and cutter, a stand mixer accessory. “It’s very nice, it’s not complicated to attach.” 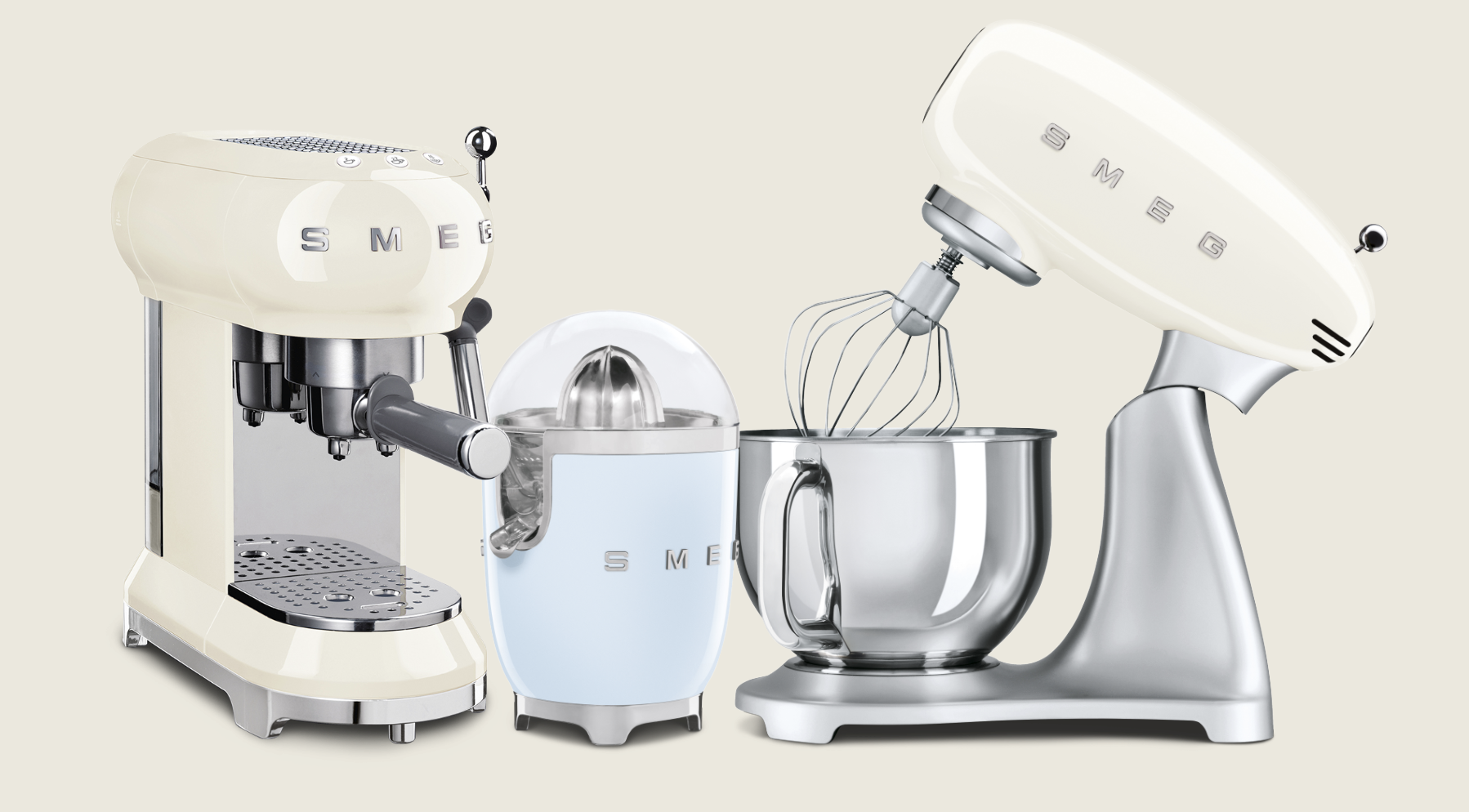 To stay healthy, everyone in their household drinks freshly squeezed lemon juice every morning, courtesy of his pastel blue Smeg citrus juicer.  “It’s very easy to clean,” he describes. “Sometimes it takes only five minutes to do the juice but 30 minutes to clean the whole thing, but not with this one.  And I like the little nose which controls the juice, whether to stop or to go. It’s well-thought-out. You can do the juice and leave it there and when you’re ready, you can just flick the nose and put your glass under.”

For his caffeine fix, he switches on his black Smeg espresso coffee machine more than once a day. “It’s very easy to use, it doesn’t take so much time to heat the water.” Normally, he takes two cups of coffee in the morning, 1 for lunch and another in the afternoon. From the same machine, he pours out his espresso while his wife prefers long coffee. “Both of us are happy,” he smiles. 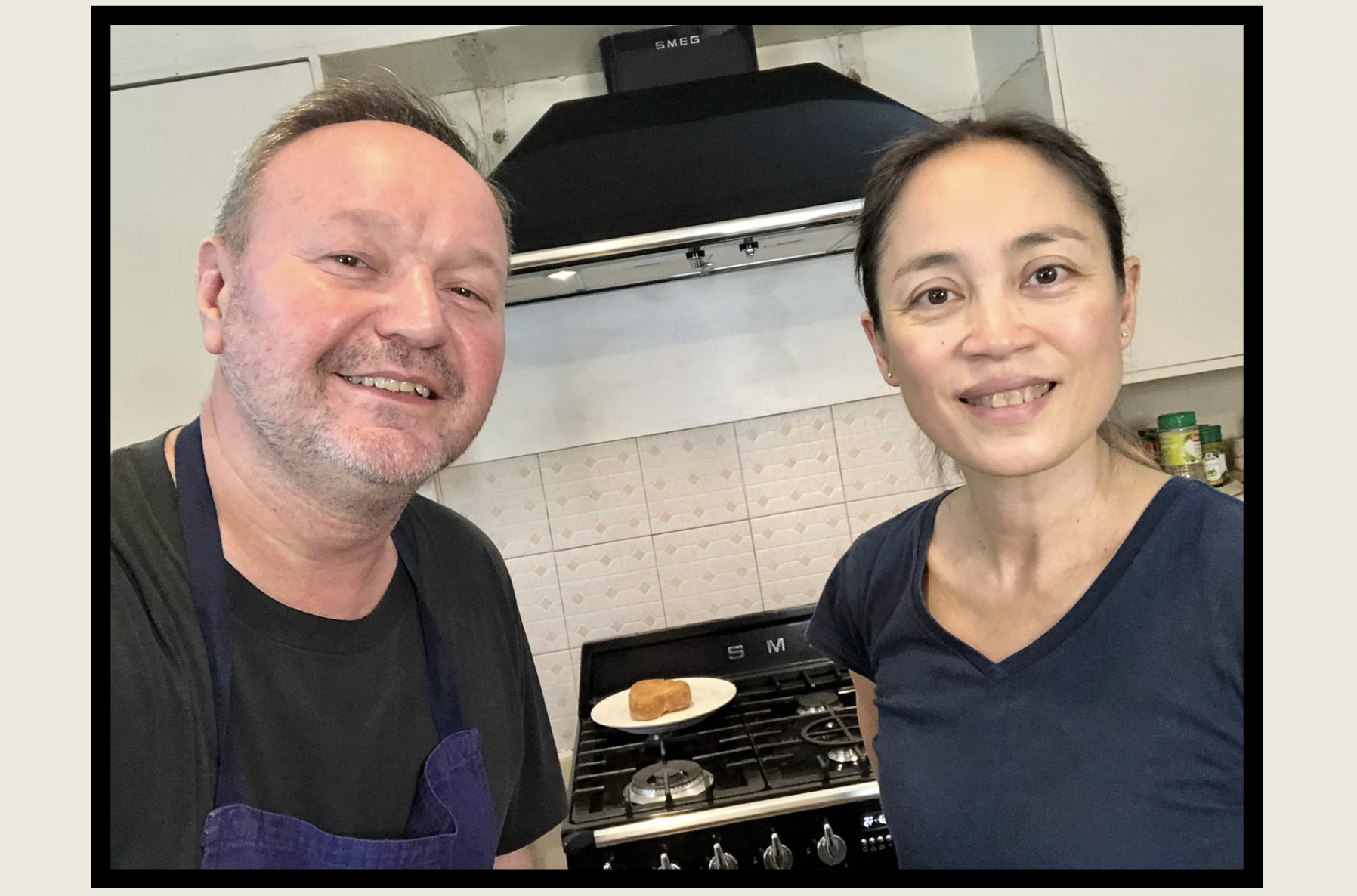 The couple can often be spotted working back to back in their kitchen. Though Anna is not a professional chef, she cooks very well. “We like cooking together, usually with a glass of wine. We plan, we decide what we want to do. Sometimes she takes care of the main course and I’ll take care of the appetizer or vice versa,” he reveals. “When you’re a chef, you don’t eat fine dining food all the time. You don’t want that, we want simple food sometimes, but always good.”

Some settle for so-so meals when there aren’t too many people around the table, they hesitate to whip up special dishes when only a few will share. Chef Cyrille says this is no reason to stop yourself from partaking of what you want. All it takes is proper planning. 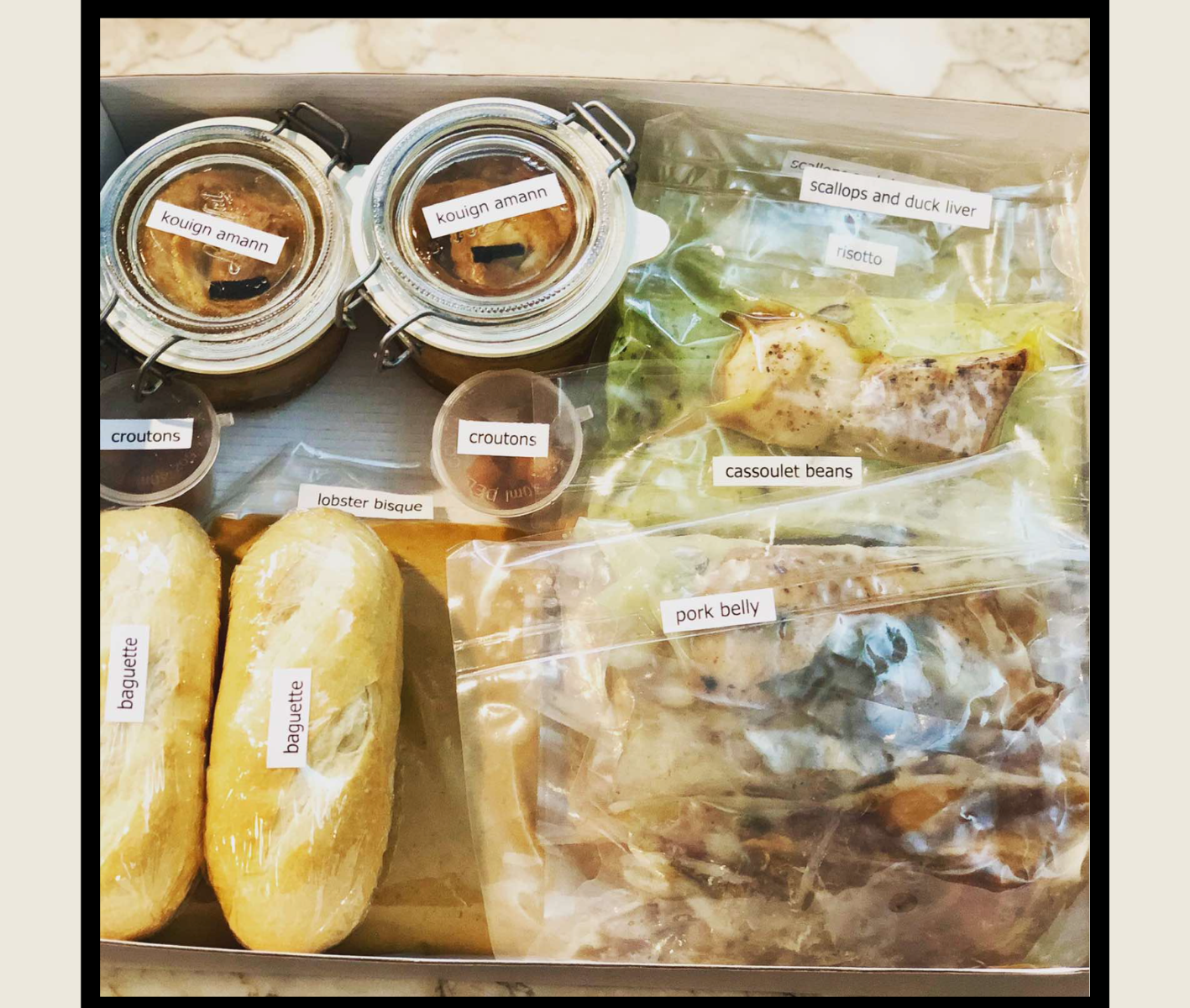 He says you can have an entire lechon even if there are only two of you. “The small lechon that I do is good for 8 or 10 people. On the first day, you can eat it as a very nice lechon. The next day, you know how it is in the Philippines, you can make paksiw. On the third day you can have sisig. You have to be a little bit creative after and turn it into different dishes. That’s what you have to think about, that’s what you have to calculate. Of course, the main ingredient will be the same, but the sauce will be different.”

The planning also extends to shopping and storage. “With all the options that we have now, you don’t have to buy in bulk, it might come out a little bit more expensive for only 1 or 2 portions but it’s quite accessible. Or if you buy more than what you need, you can pack in smaller portions before you put in the freezer.”

Most recipes available in books and online are for big servings of 4 to 8. Chef Cyrille says you can’t just always divide the ingredients to the quantity you want. “It’s going to be difficult, you might come out with a totally different taste,” he warns. So for those thinking of impressing their loved one with an outstanding meal but struggling to find exceptional recipes for two, chef Cyrille comes to the rescue and shares below properly portioned recipes for a 3-course meal for two, ideal for a romantic dinner date.  It might come in handy with February 14 just around the corner. 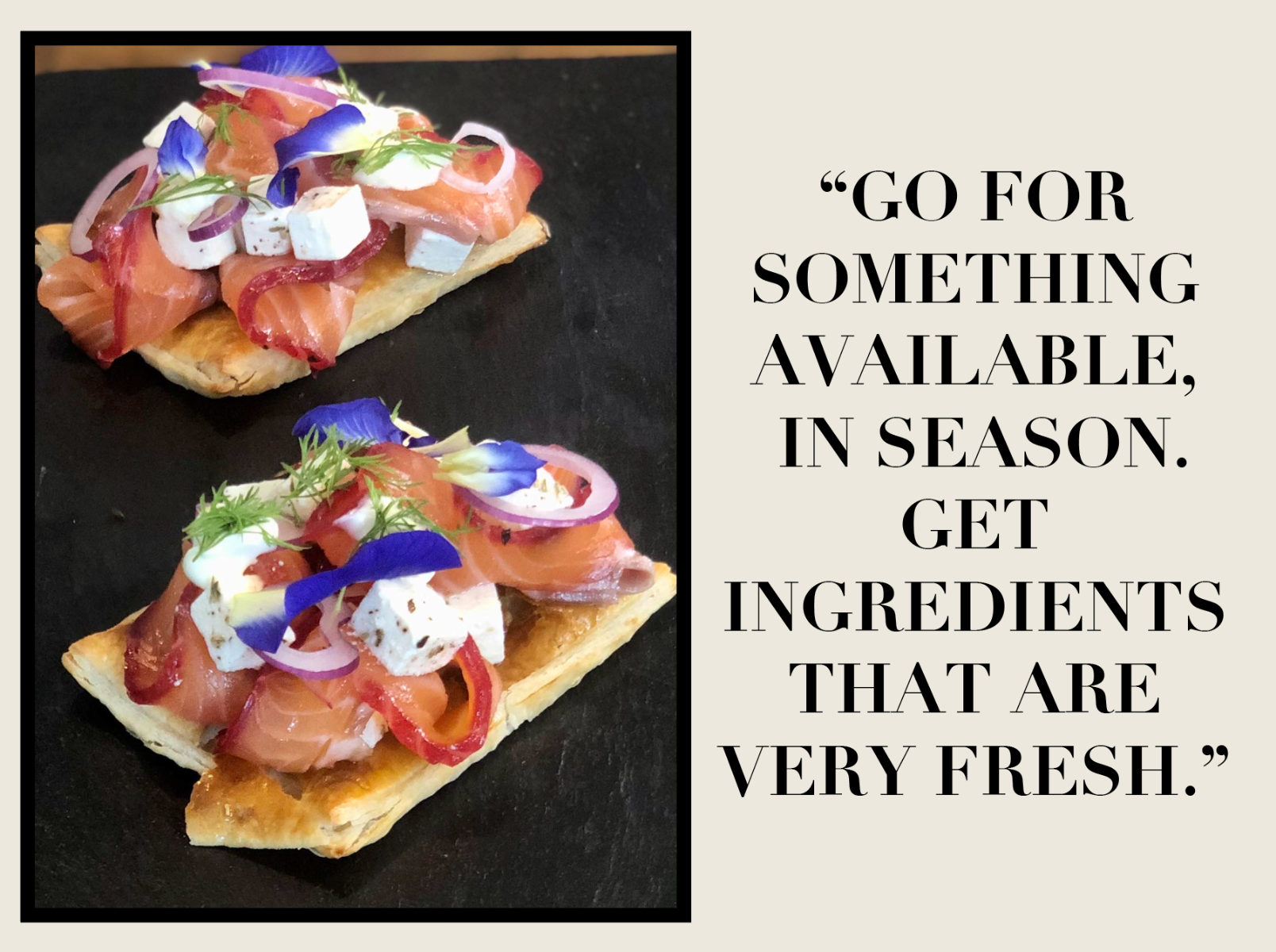 “People need to try and do a sample of recipes. They cannot just say they will do it for Valentine’s dinner. If you’re not a chef and you’re doing a recipe for the first time, it’s very risky. If you miss one step or whatever, it might be a total disaster. It’s nice to try it first and when you master the recipe, it’s easy to do for other people,” he advises.

He puts emphasis on the proper ingredients. “Go for something available, in season. Get ingredients that are very fresh. I know it’s a little bit of a hassle when you have to go to the market or have to wake up a little bit early but you will taste the difference, the quality and the freshness of the product is very important.” And if the meal is for a specific person, he suggests using ingredients that are among that person’s favorites. “She will be very happy and very touched.”

But a romantic dinner at home is not just all about the food, other small details play a part too. “Instead of the usual, create something a little bit different. Change the table napkins, have some flowers on the table, try to use your best plates, put on candles. Change the music to something that your love likes. It’s all about ambiance and the way you dress as well, don’t be in shorts.” He mentions a sweet Valentine gesture, “give a small gift before starting dinner or add one at the end.” 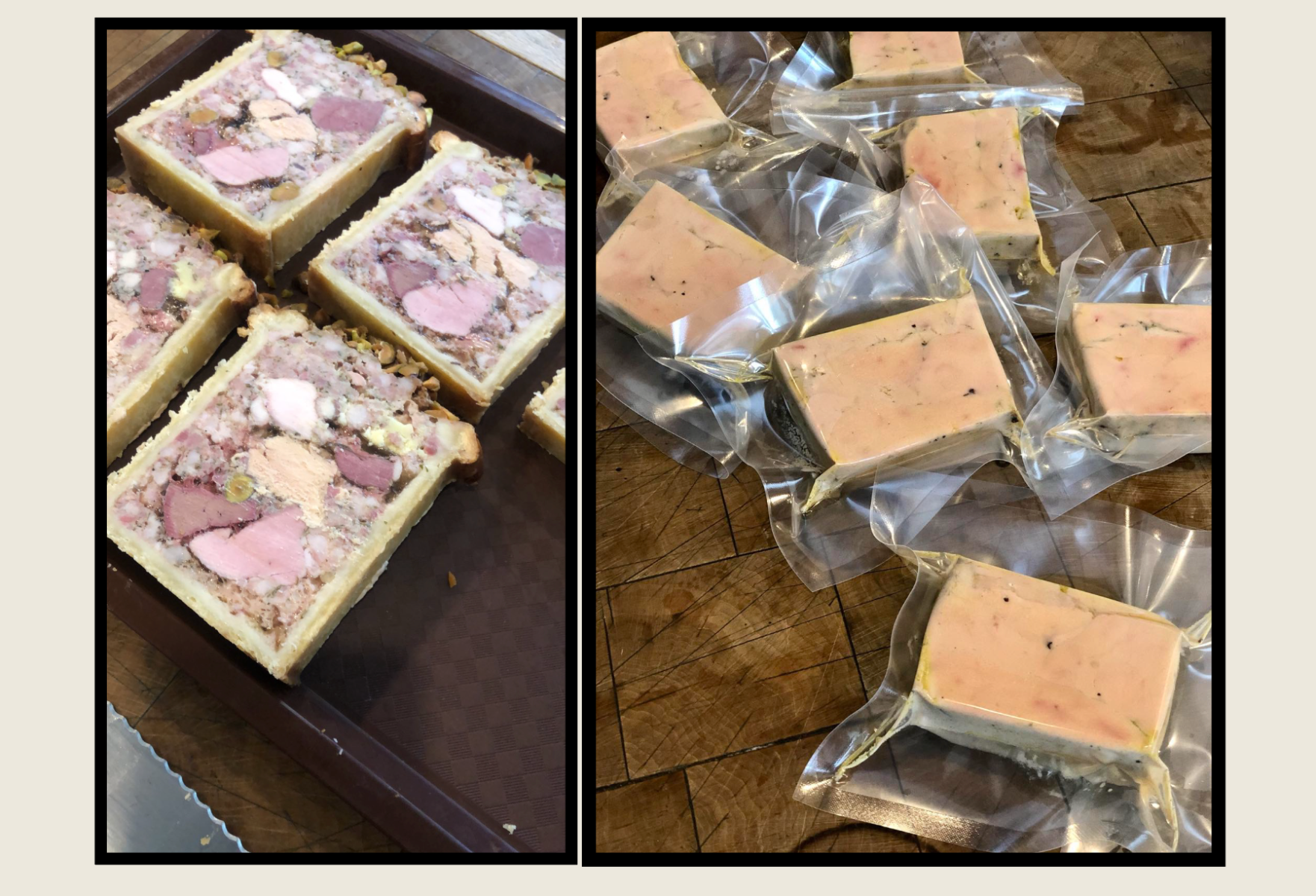 “One thing very important is the wine because a nice glass will put you in a certain mood and everything will be better. If you don’t drink alcohol, you can come up with a nice mocktail. Again, something to make it different for your Valentine’s celebration,” he continues.

He was quick to remind though that the most important thing is for everyone to have fun. “They don’t want to become a slave just for a romantic dinner for Valentine’s day. They should do something that they like, that the person in front of them like as well, but something that will allow them to relax. Because imagine, if they are stressed and everything, how will the dinner be? It’s nice to prepare to make people happy, but you need to enjoy,” he concludes.

If you decide to leave the cooking to chef Cyrille, you may inquire about Valentine packages from CiÇou à la Maison at (0917) 5401811.

A SMEG VALENTINE'S WITH CIÇOU A LA MAISON 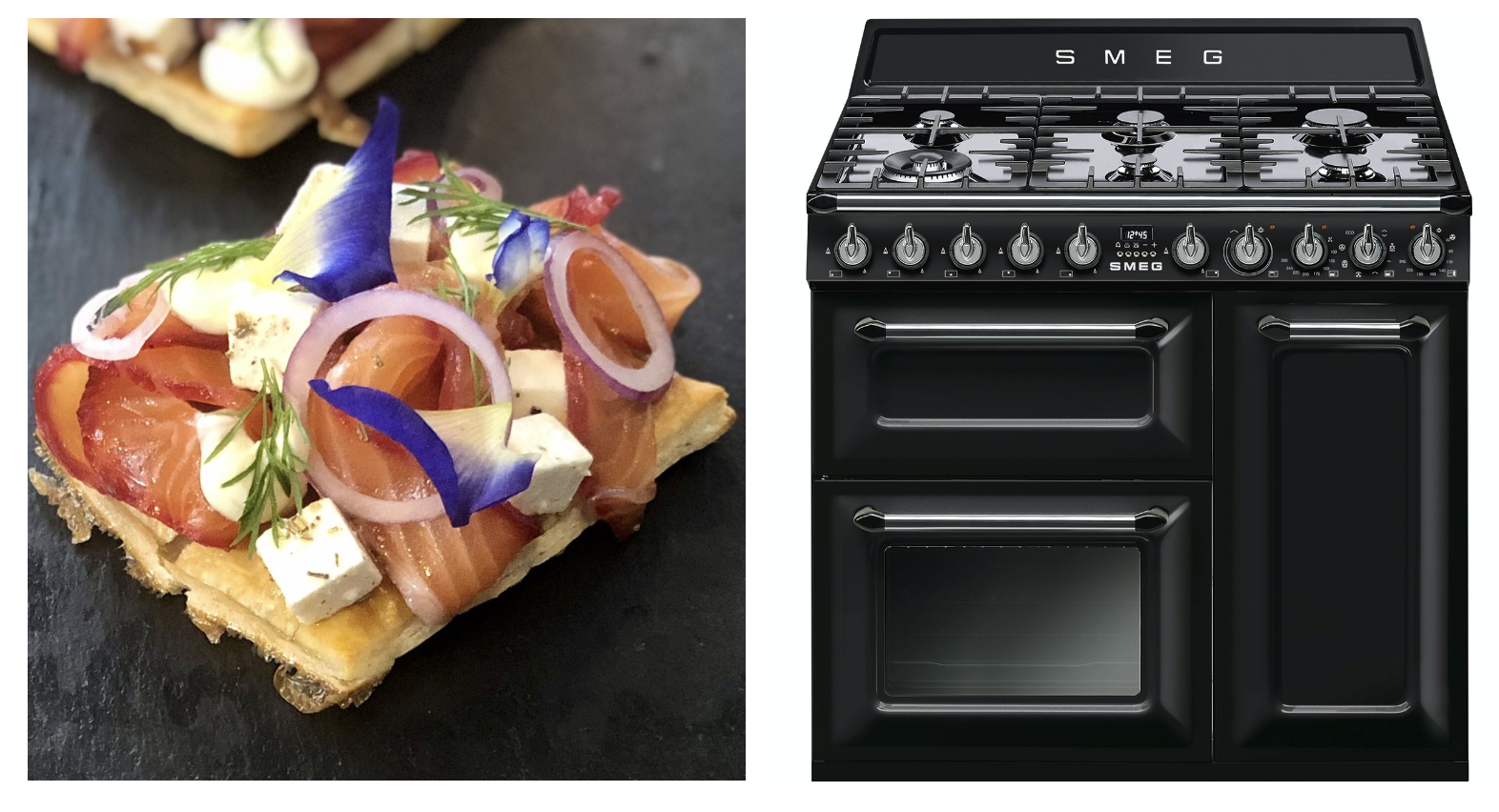 (Made with the Smeg Range Cooker with Pizza Oven) 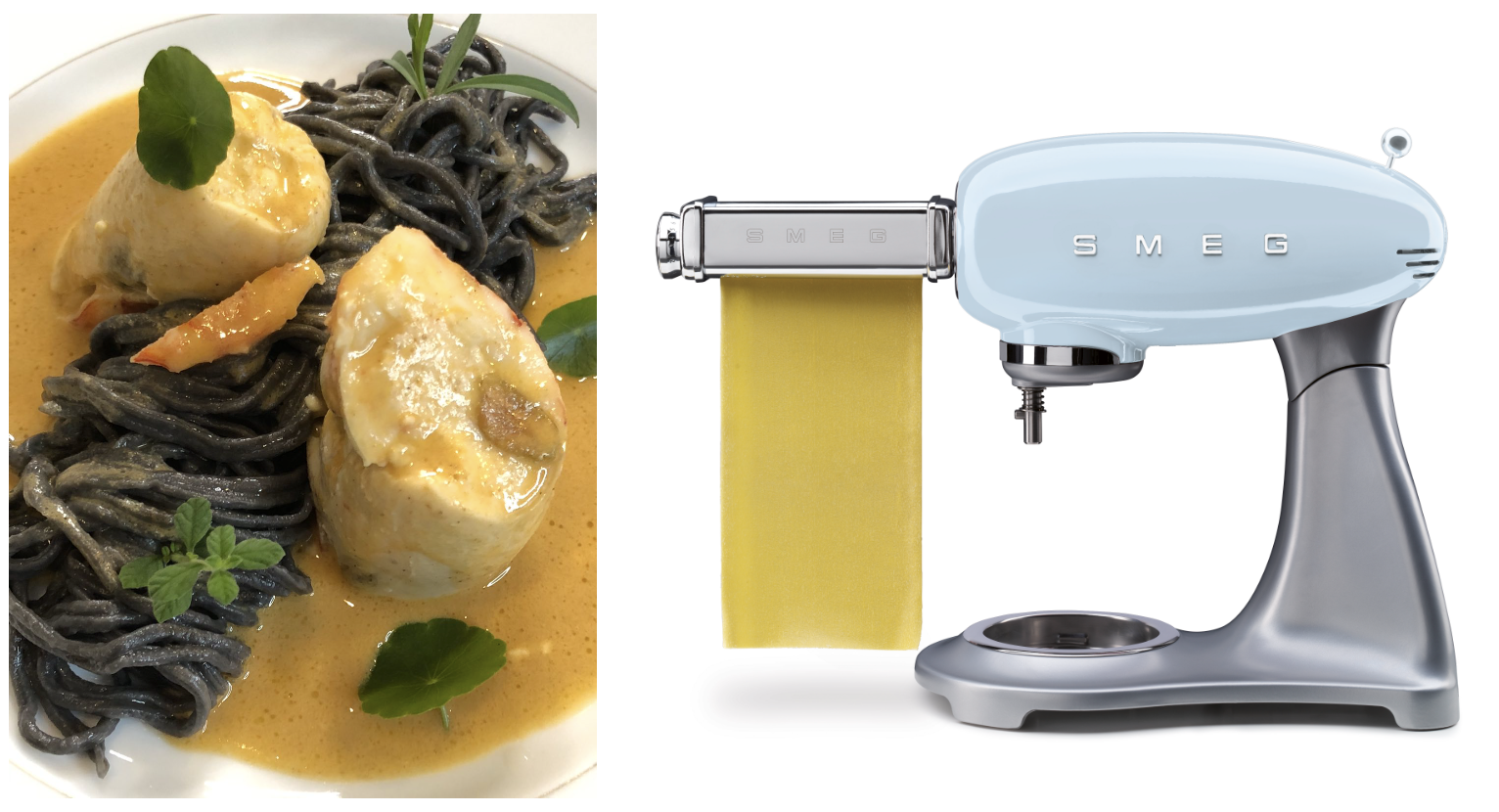 (Made with the Smeg Stand Mixer, with the Pasta Roller & Cutter Accessory) 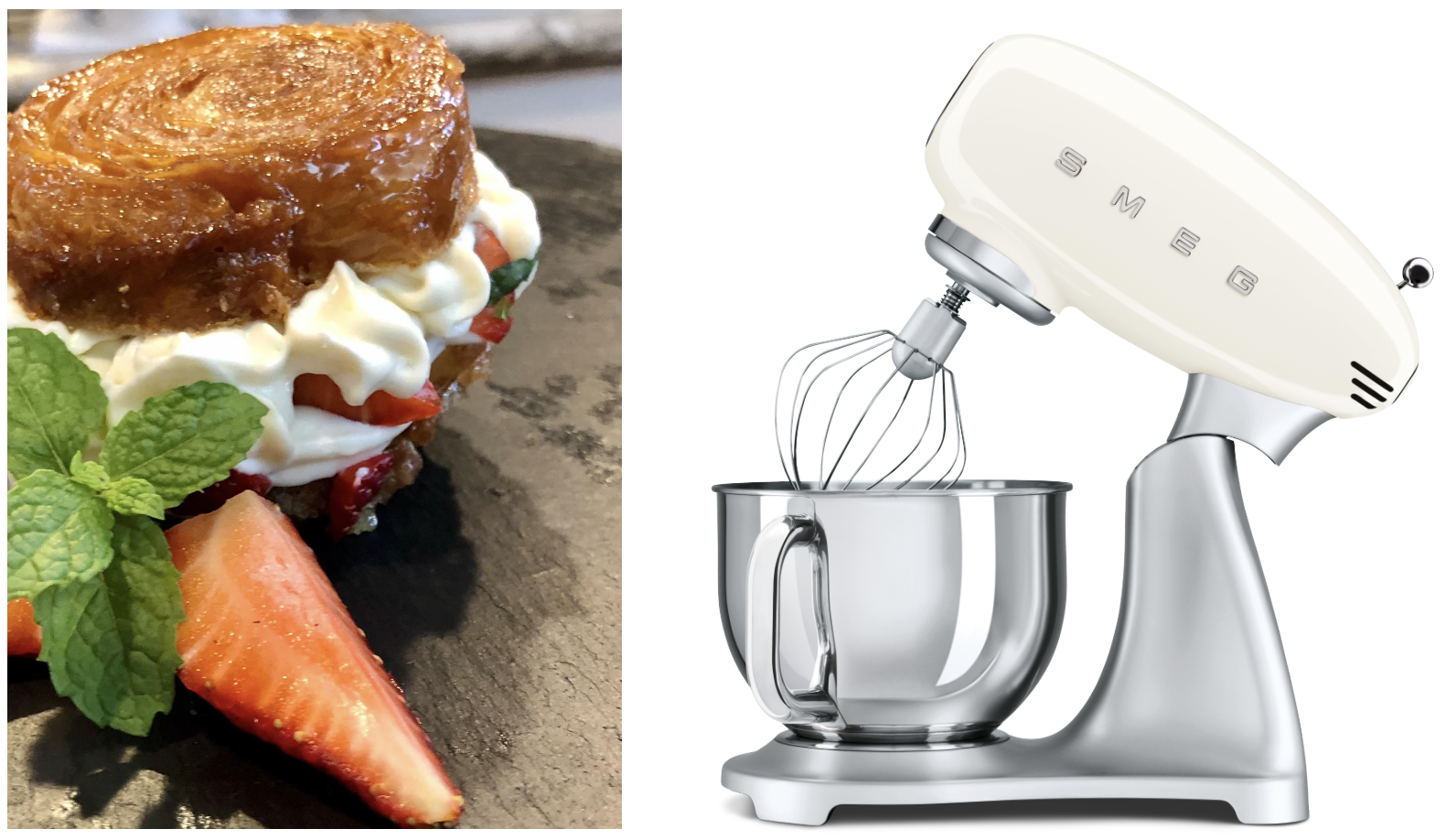 (Made with the Smeg Stand Mixer)

If you are interested in the Smeg appliances that chef Cyrille Soenen uses in his kitchen, check them out at the Smeg Experience Center at Park Terraces in Makati or Design Center in Mandaue. Or you may shop online at www.smegphilippines.com. For inquiries, message the Smeg concierge at sales@smegphilippines.com or @smegphilippines on Instagram and @smegph on Facebook.