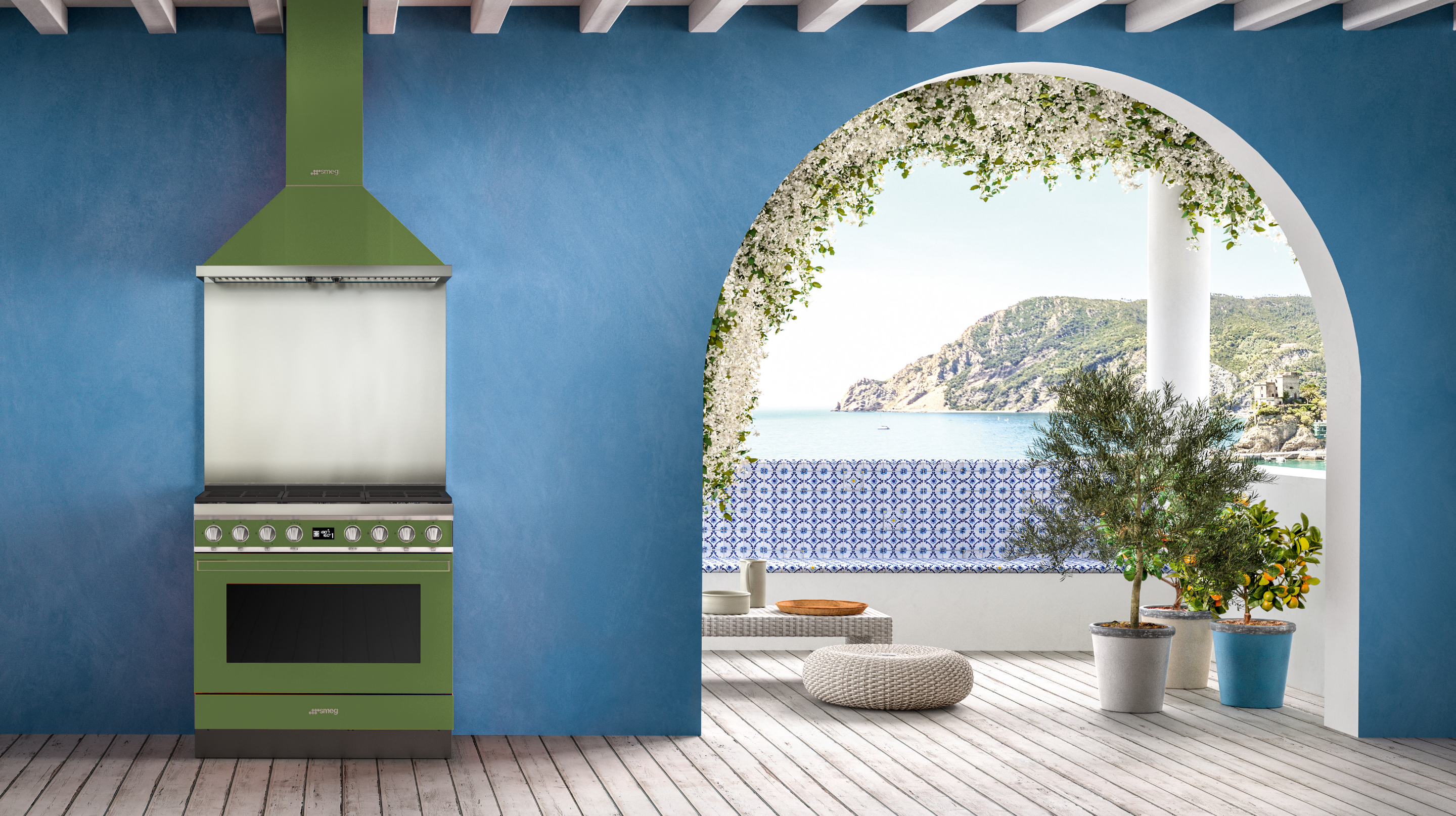 Smeg is introducing a new range cooker to the Philippines. With its exceptional qualities combining aesthetics and innovation, it is bound to get snapped up fast.

The Portofino free standing cooker has distinctive features that make it perfect for the home chef who enjoys cooking for a large family and entertaining guests, it’s built for professional performance in a domestic environment. It combines luxurious Italian style with impressive technology, typical of Smeg home appliances. 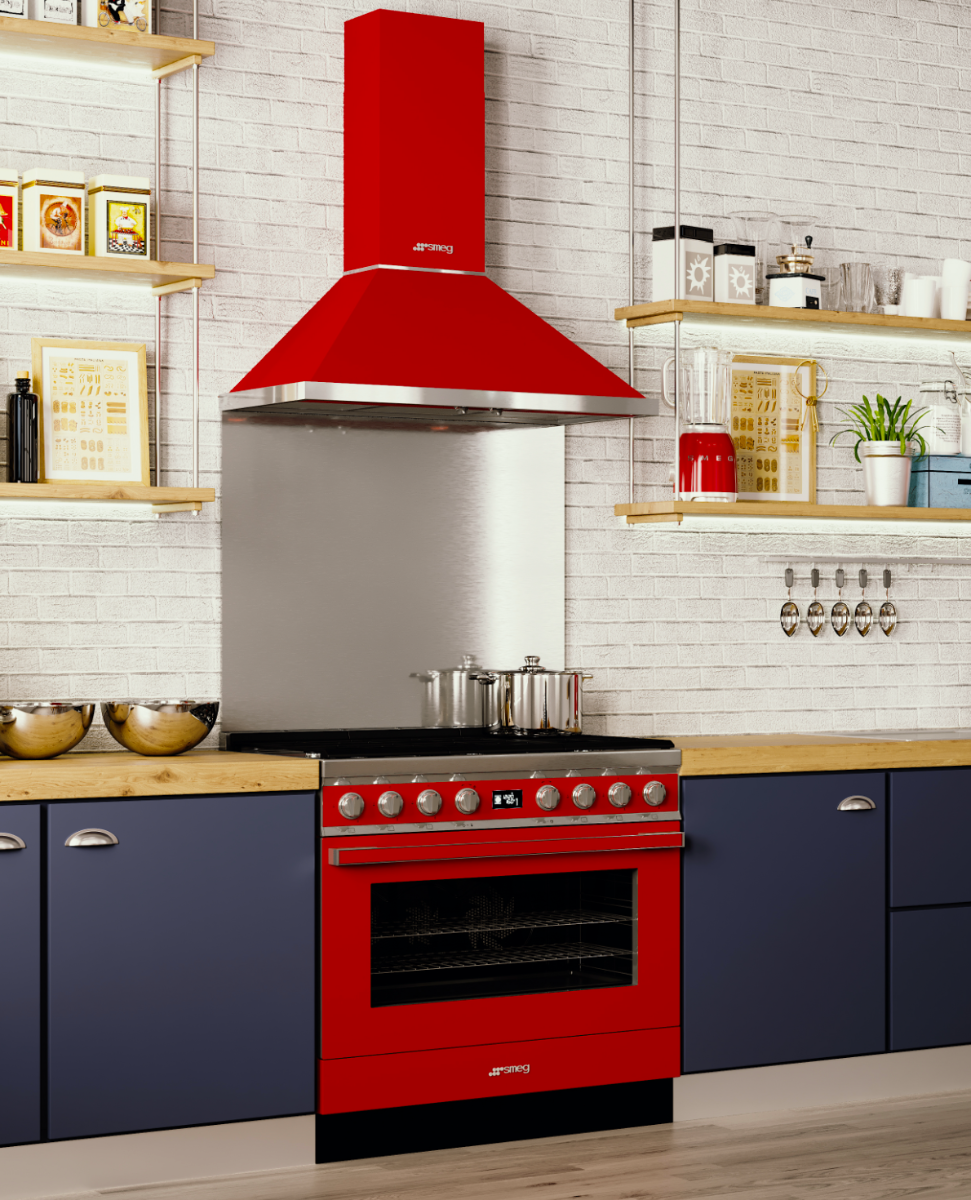 It is equipped with Smeg’s signature Thermoseal technology, which ensures that no cold air enters the oven during the cooking process. This results in a 50% reduction in pre-heating time, the temperature of 200 C can be reached in just 8 minutes. So despite its large dimension, the Portofino’s energy performance is optimal. 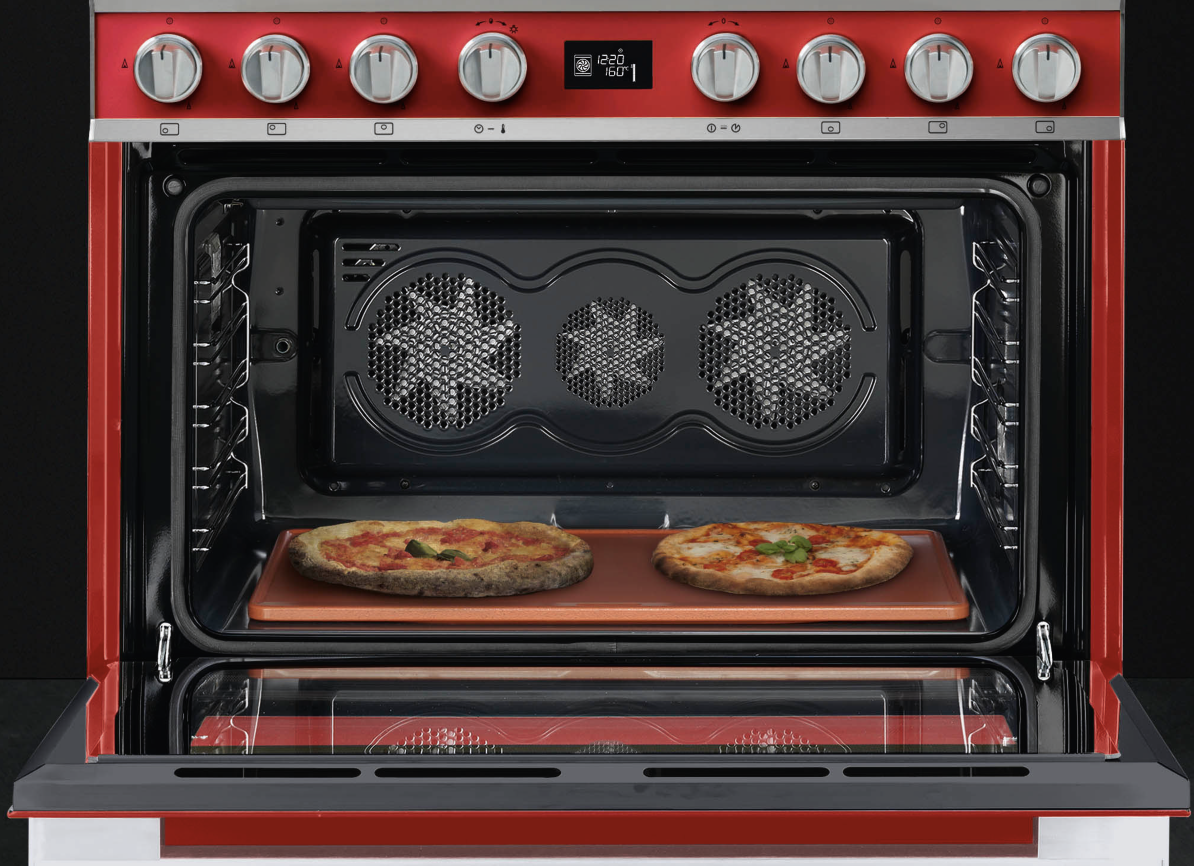 The Thermoseal technology works alongside the Venturi Atmospheric Control which allows excess moisture of food with high water content to escape into the cooling system, decreasing any condensation build-up. The Venturi valve also contains a catalytic converter which diminishes the release of odors through steam, making it possible to cook different food items simultaneously, minus taste and smell transfer.

And cooking in all five levels is homogenous because the temperature inside the cavity is guaranteed constant by the powerful motors and the exclusive three-fan system. Two large side fans distribute the air around the outer perimeter of the cavity while a smaller central fan increases ventilation by creating a vertical vortex of heat.

With the use of a large refractory stone, the Portofino oven is capable of quick and easy baking. By activating the Turbo function, you can cook two pizzas in just 4 minutes. 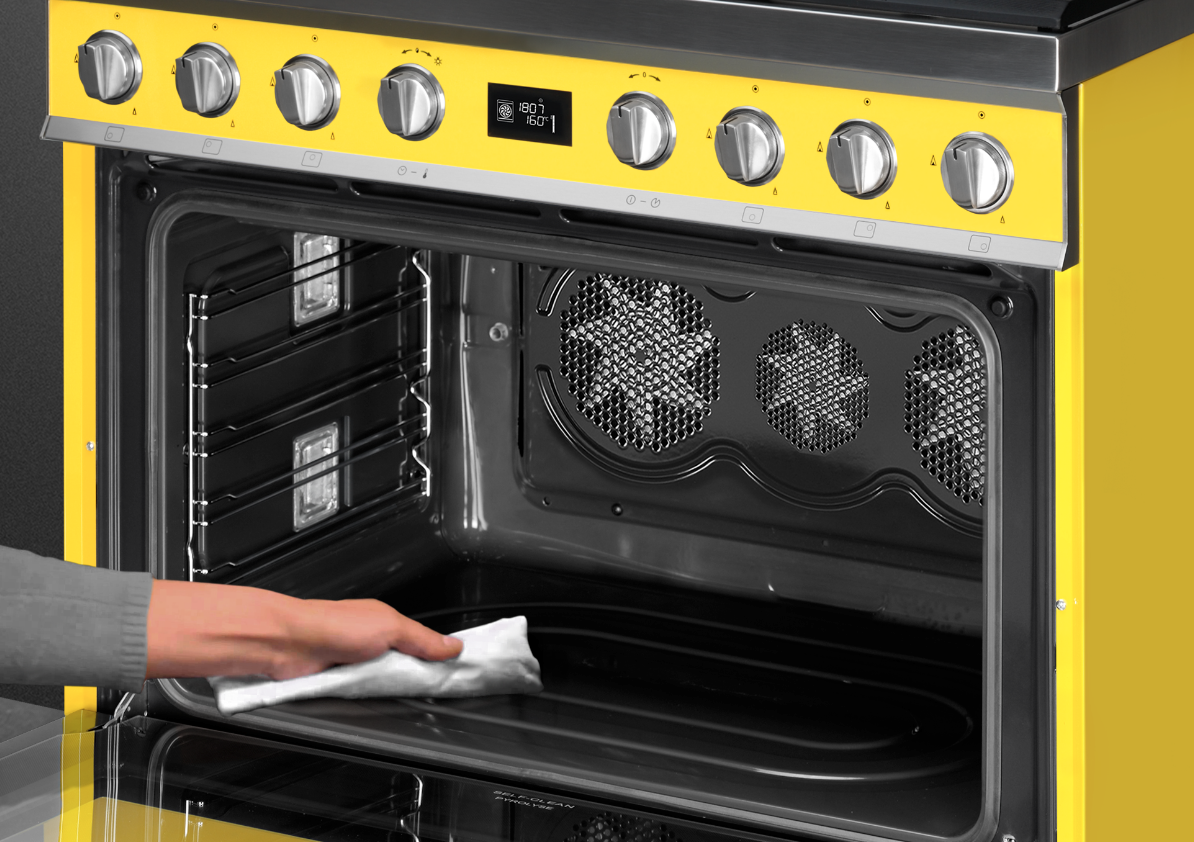 The Portofino has 20 automatic cooking programs to choose from. All you have to do is press the one corresponding to the item on your menu. What are you having? Roast beef, fish, tarts, paella, pasta? Leave it to your Portofino oven.

After the food’s been transferred to platters and plates have been wiped clean comes the part that nobody enjoys – cleaning. But with the Portofino, there’s nothing to dread because you hardly need to do anything. Its Vapor Clean function facilitates cleaning through the use of steam generated by pouring a small amount of water into the hollow of the oven base. Burnt-on food from the walls of the oven will simply fall off. This happens effortlessly because of the special ever clean enamel finish which prevents grease residues from sticking to the surface. The oven also has an inner glass that can be removed in a flash for a thorough cleaning. 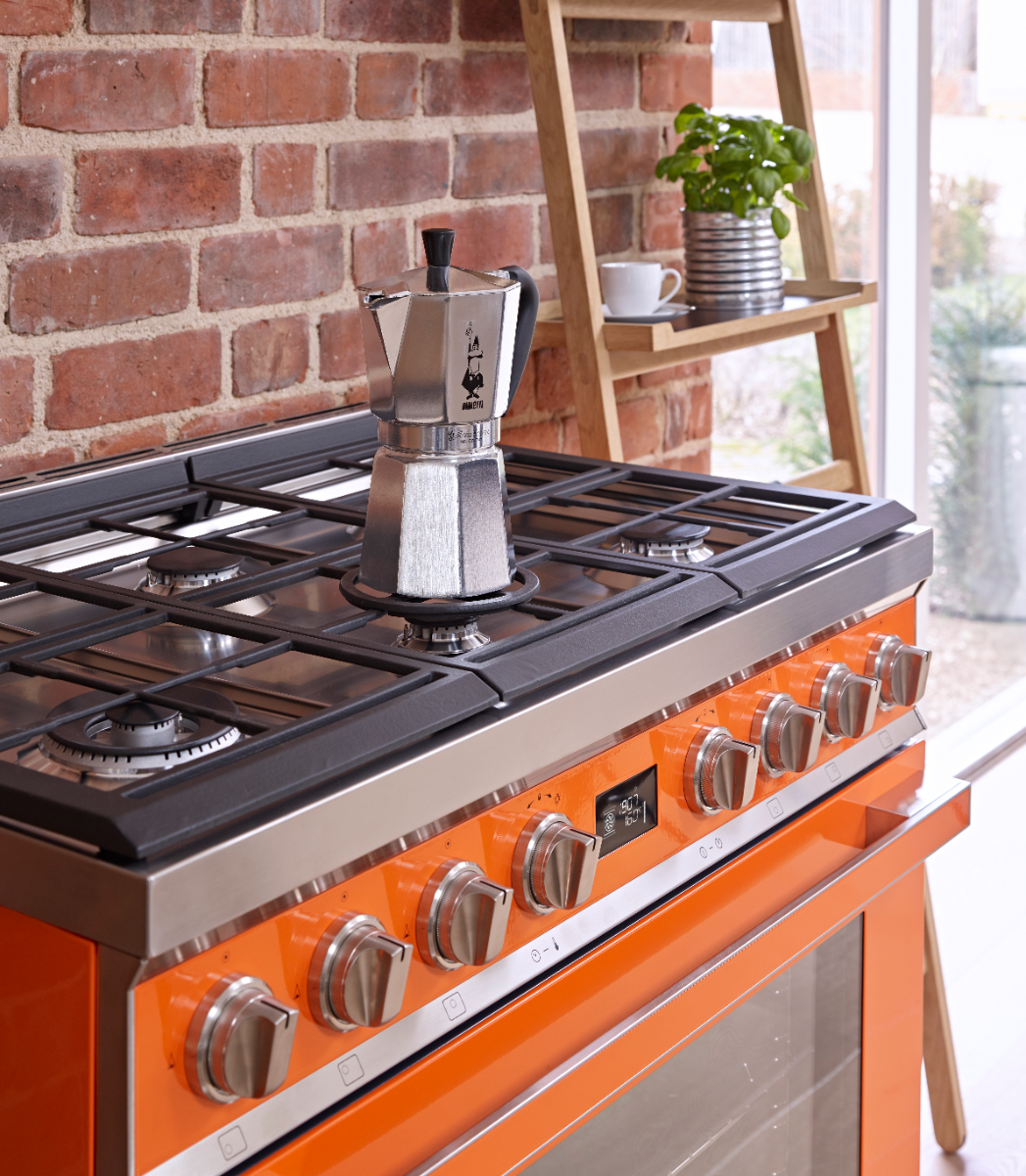 Whether you’re cooking or tidying up, you don’t have to worry about the oven doors slamming dangerously, the Portofino has a soft close system so the oven door closes softly and silently.

The Portofino gas stovetop is fitted with six burners, each with independent control to ensure maximum ease of use as well as professional results. A particular one stands out because it works extremely fast. Called the dual ultra-rapid burner, it consists of a double crown formed by the combination of an ultra-rapid burner and an auxiliary one, which allows for power of up to 4.2kW. The entire surface of the hob is covered with heavy-duty cast iron grids which gives more flexibility for large pots, pans, and woks. 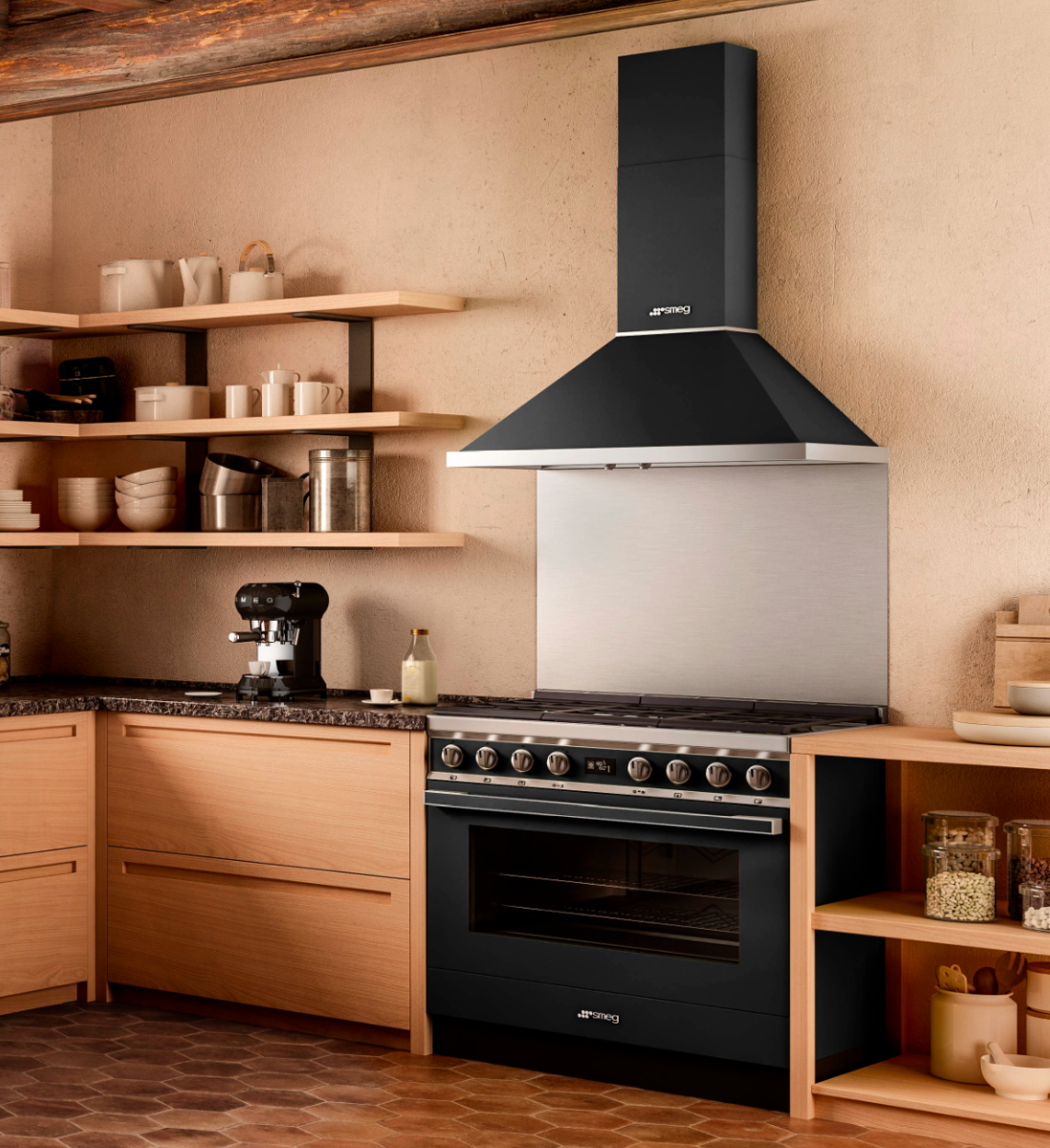 The Portofino cooker is characterized by rigorous lines, it is very sleek and modern. The metal knobs are robust, solid, and ergonomic. The cooker’s front panel shows an intuitive LCD. At a glance, the fine construction is immediately evident. Upon closer inspection, you will confirm the high-quality materials used for every part. And because it is named after a small fishing village on the Ligurian coast of the Italian Riviera, it is available in colors inspired by the vibrant Mediterranean atmosphere such as sunshine yellow, coral red, olive green, and burnt orange. For the more conventional, there is anthracite. The cooker can be slotted between cabinets or you can opt to showcase the beautifully-colored sides and make it an exquisite free-standing centerpiece.