Steel: The Most Preferred Steel: The Most Preferred

The pull of range cookers with stainless steel finish remains strong. It is totally understandable to gravitate towards this neutral hue that is modern and industrial yet can feel homey with the right styling. It is preferred in professional kitchens because its non-porous material effectively resists harmful microbes. You can easily wipe it clean or scrub hard and not cause damage. It is strong enough to withstand the toughest use.

Smeg has three models under its stainless steel series: the Opera, Sinfonia, and Concert. Inspired by the world’s greatest chefs and best designers, each variant is ergonomic and crafted with meticulous attention to detail. They are available in different sizes that come with different technologically-advance features, all have electric ovens combined with gas and electric hob options. 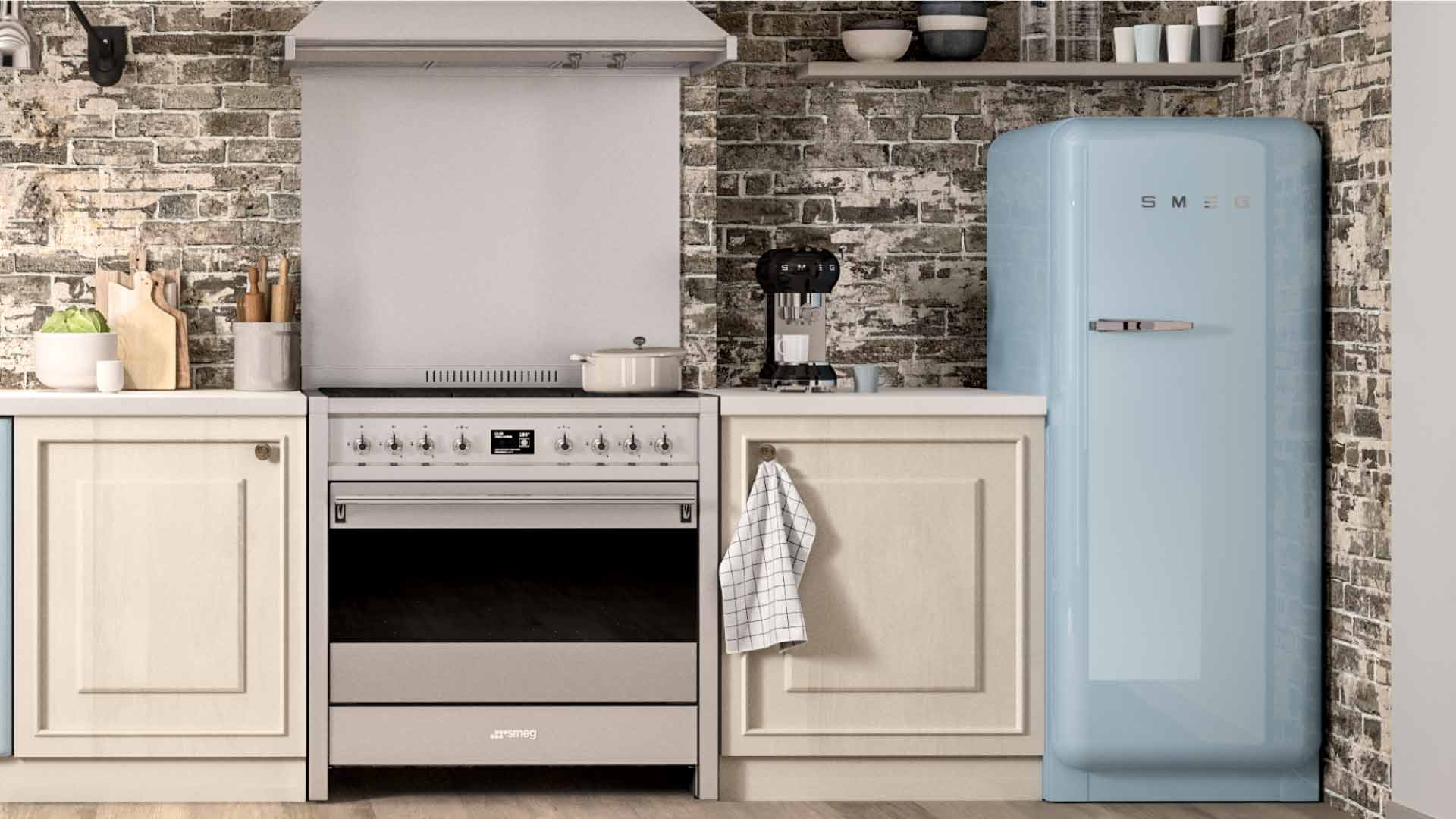 The Smeg Opera exudes simple elegance, it has distinct lever-shaped controls and robust handles. Its 150cm variant is the flagship range cooker of Smeg, it is the biggest of all models and was designed with serious cooks in mind. If you have a large family or frequently entertain guests, look no further.

Simultaneous cooking is not a problem with seven gas burners including two dual burners (4.20 kW and 5.0 kW) with one strategically positioned on the side of the hob.  When the knobs are pushed and turned, the automatic electric ignition does its job and fires up the burners. Alongside the gas burners is a special BBQ electric zone so you can prepare a wider variety of dishes.

You can do all the roasting and baking you want with the Opera 150cm because it has two electric ovens, one with a 77-liter net capacity and another with 54 liters. With the Thermo-Ventilated Oven Technology, a ceramic blanket ensures that no hot air leaves and no cool air enters the oven during cooking which means the temperature is perfectly controlled. This is important to get juicier meats and achieve even baking.

Pizza preparation is simple with the Opera 150cm, thanks to its special pizza oven feature. All you have to do is put in the refractory pizza stone and you’ll get an evenly cooked pizza in 3 to 5 minutes. This feature can also be used for baking bread, savory flans, fish or vegetables wrapped in foil. They won't dry up. Inside the pizza oven, they will stay moist through the process. 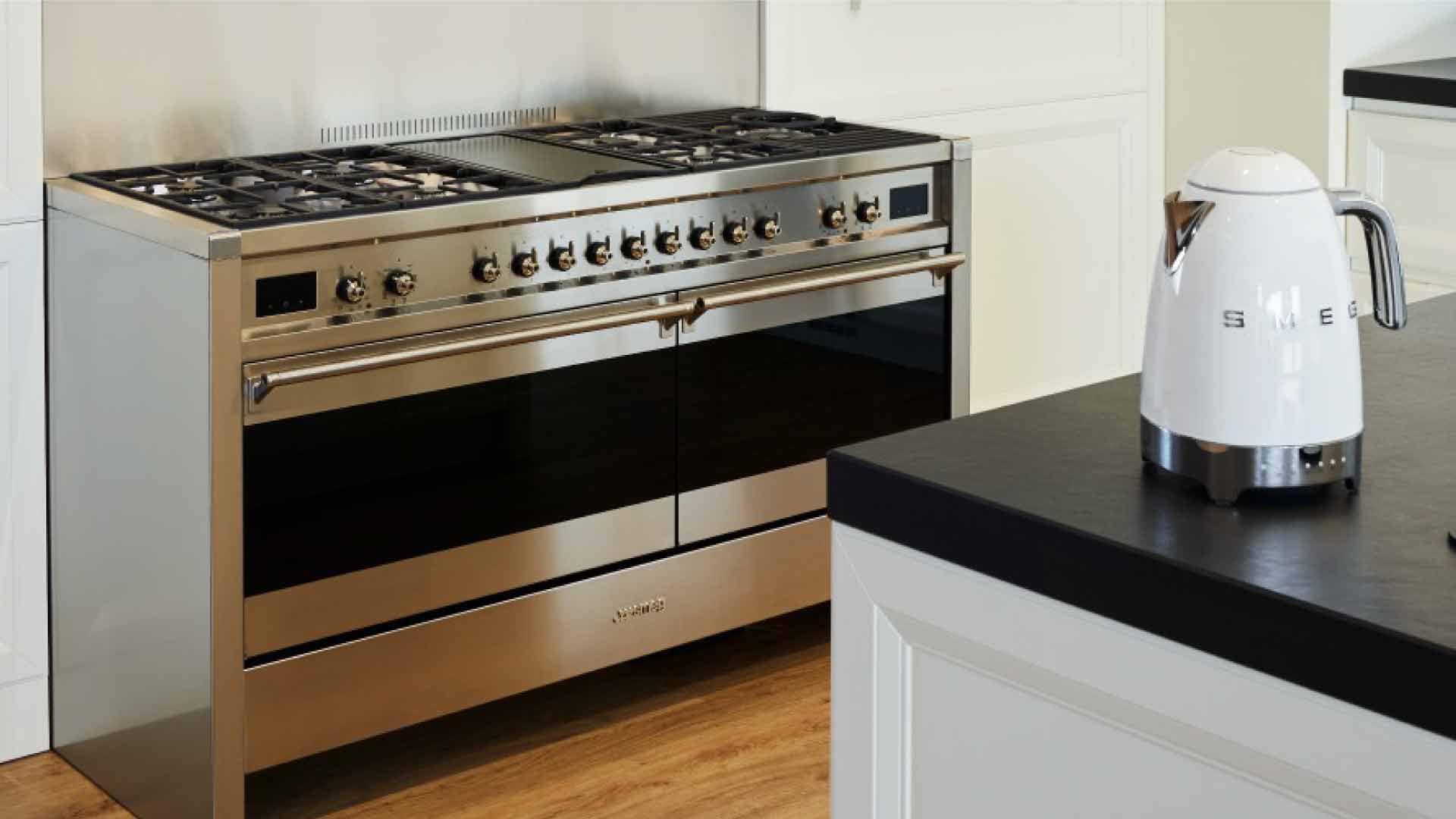 The Opera 150cm is built with a Tangential Cooling System, this keeps the sides and the door of the range cooker cool, the system continues to function even when the oven is switched off to ensure that accumulated heat is released faster. Having this contributes to the appliance having a longer lifespan.

To avoid accidents, the Opera 150cm is installed with excellent cavity insulation and a multiple-layered heat reflective glass so that the outer door surface doesn’t get warm. This Cool Door Technology makes the oven door always safe to touch and operate from the outside. Furthermore, gas safety valves are in place to regulate the flow of gas through the hob and prevent gas from flowing through the stove when the hob is not in use.

Like the Opera 150cm, the smaller Opera 90cm variant’s hob is fueled by gas and its oven powered by electricity. It is also equipped with Tangential Cooling System and Cool Door Technology.

While the Opera 90cm only has one oven, its net capacity is a whopping 115 liters. The space can be maximized and cooking time optimized by placing several dishes in the oven simultaneously. You can confidently combine sweet and savory items without worrying about mingling flavors and odors. Aside from Thermo-Ventilated Oven Technology, the oven runs with Triple Fan Technology so you can cook like the pros. The two large side fans distribute the air around the outer perimeter of the cavity while a smaller central fan increases ventilation by creating a vertical vortex of heat. This exclusive three-fan system combined with the increased power of the motors maintain a uniform temperature within the cavity so food is cooked evenly.

The oven boasts of a self-cleaning function. With the Catalytic Clean, catalytic panels that can easily absorb grease are situated inside the oven. Once the oven is heated, it burns off and softens food stains and splatter. Whatever is left, you can just gently wipe away with soapy water. 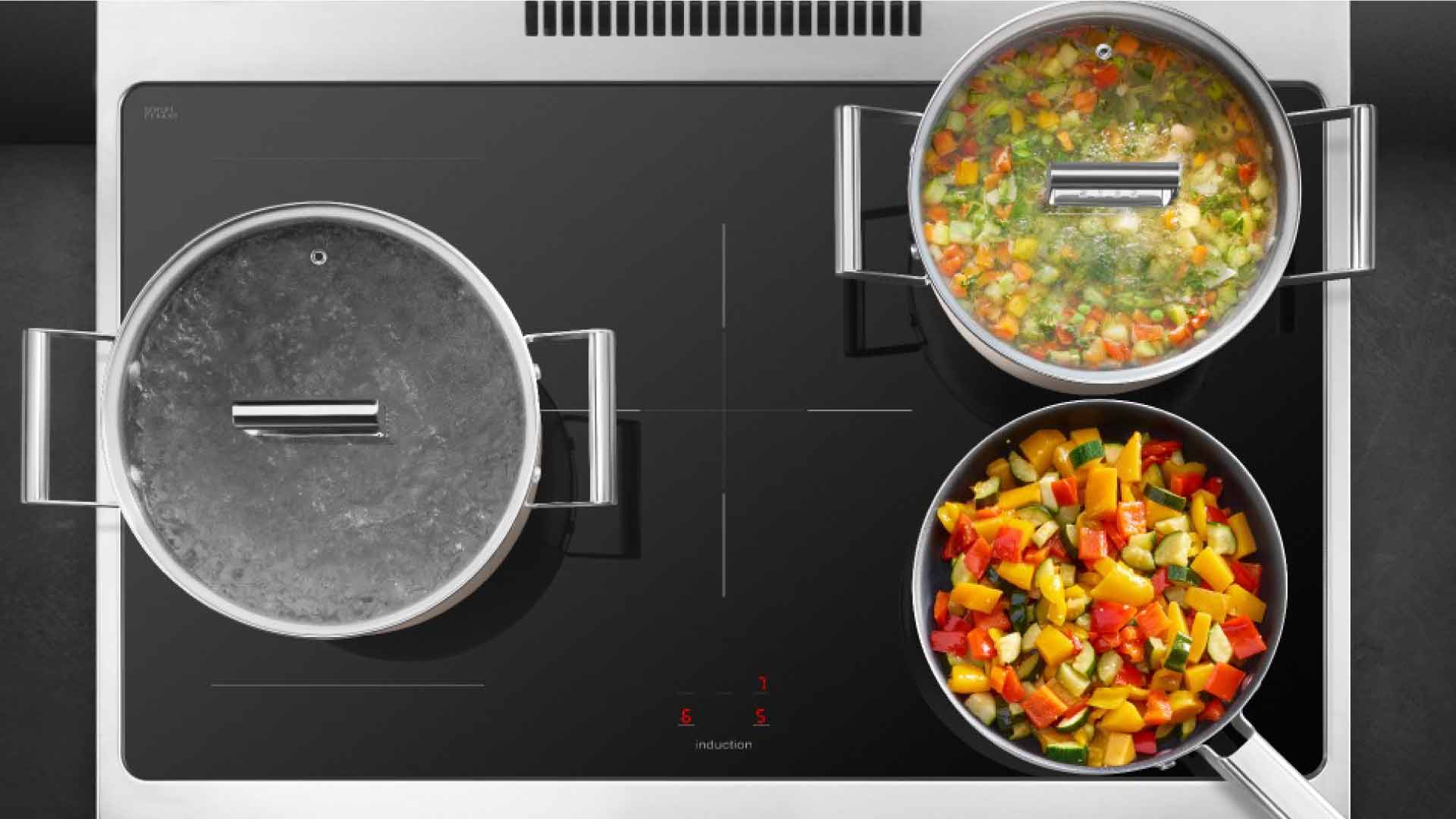 The Smeg Sinfonia can be recognized by its square design, it conveys the look and feel of a professional kitchen in a domestic environment. Performance-wise, it can meet the demands of the most exacting chef.

On the surface of the Sinfonia 60cm is a MultiZone Induction hob with Power Booster that can be manipulated with digital touch controls. Apart from the single cooking zones, the MultiZone combines two zones and manages them as a single cooking zone to offer an extra large cooking area, so it doesn’t matter how big your pan is. The Power Booster enables the induction zones to reach extremely high heat really fast, so if you’re in a hurry, you can rely on your hob to deliver quickly.

The Sinfonia 60cm induction hob has a Thermo-Ventilated Electric Oven so the air you start cooking with is the air you end with. Its features also include Tangential Cooling system and Cool Door Technology so even if the oven is on full blast, you can stand in front of the range cooker comfortably and keep working on the hob safely. 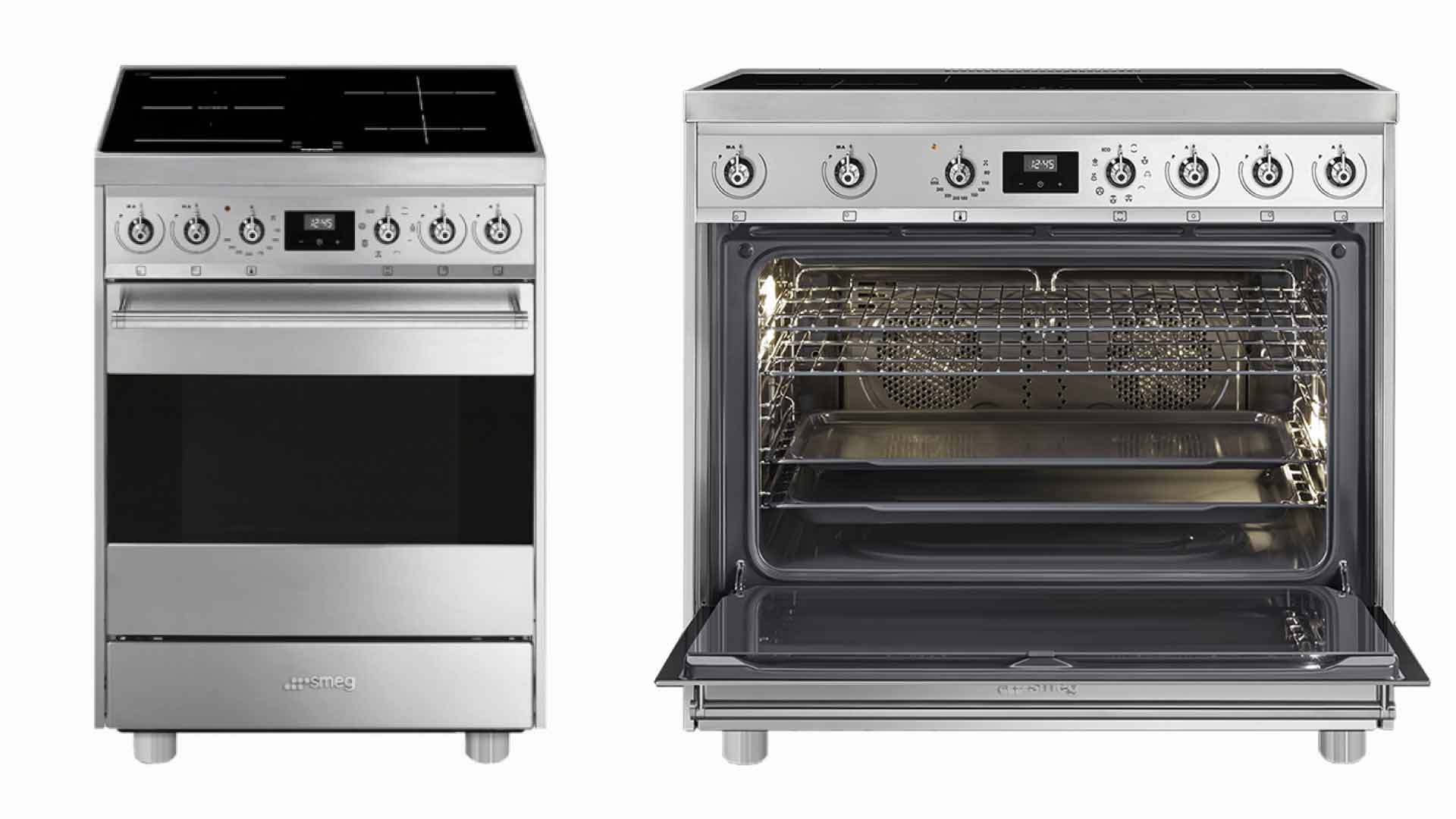 Post-cooking is made easy because the hob’s flat glass surface doesn’t require much effort to tidy up. On the other hand, the oven has the impressive Vapor Clean function for simple, eco-friendly, and energy-saving way to lift spillages and burnt-on food residue. How does it work? Just pour a small amount of water into the groove in the cavity, this generates steam which does the cleaning without the need for chemical additives.

The wider Sinfonia 90cm induction hob is fitted with all the features of the Sinfonia 60cm but it offers a bigger oven space of 115 liters net capacity. The extra large cavity can cook several different dishes at the same time, without flavor and odor transfer. 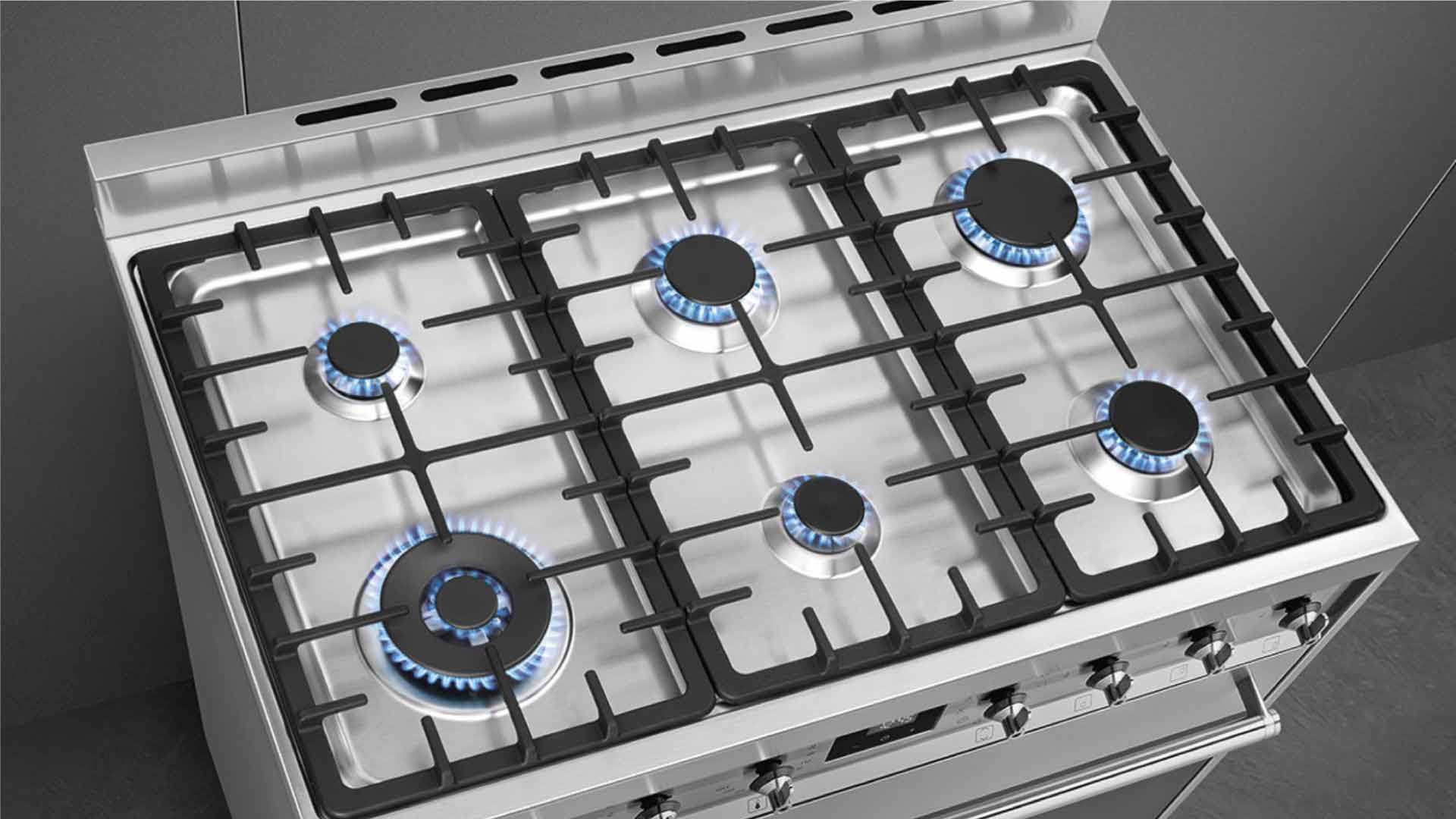 The Sinfonia 60cm gas hob has four gas burners, one of which is a 4.20 kW dual burner. It has a cast iron pan stand that conducts heat and efficiently distributes it to the pans to be transferred to the food being cooked.

It is equipped with a Thermo-Ventilated Electric Oven with Tangential Cooling System and Cool Door Technology plus the convenience of Vapor Clean.

The bigger Sinfonia 90cm gas hob has six gas burners including a 4.20 kW dual burner. In addition to the features of the 60cm, it comes with a cast iron wok support for your specialty bowl-shaped frying pans and its oven cavity is larger with 115 liters of net oven space. 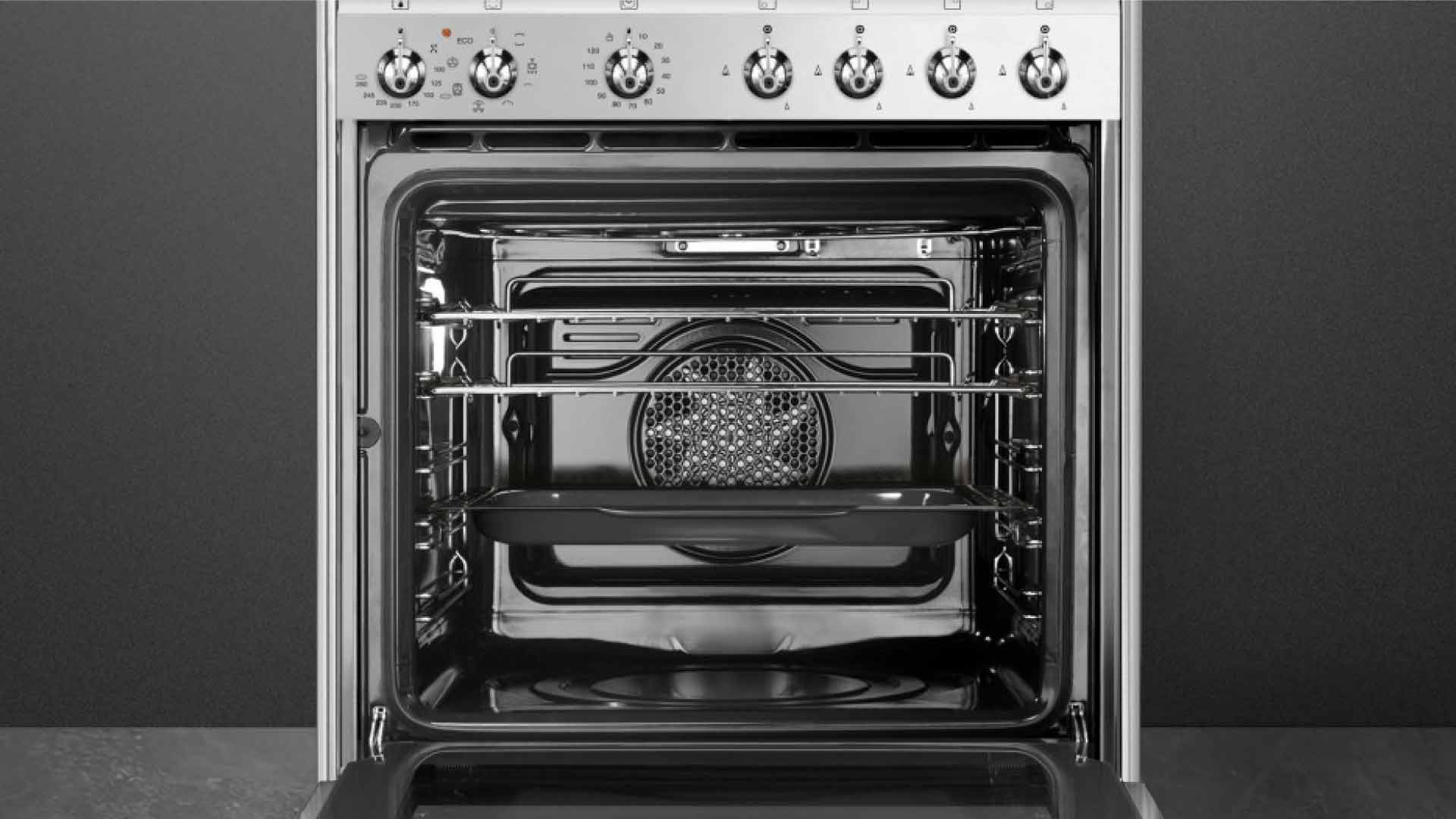 The Smeg Concert range cooker’s design is timeless. It is differentiated by its softly rounded top, solid stylish doors, and classic controls and handles.

Get your meals done quickly using the Concert 60cm induction hob which has four induction zones plus Power Booster for extra fast heating. Its flat glass surface is easy to clean and its digital touch controls ensure maximum safety.

Because of its fan-assisted oven with three heating elements, you can use all the shelves and cook different dishes all at once without the flavors and odors intermingling so you save time, energy and money. 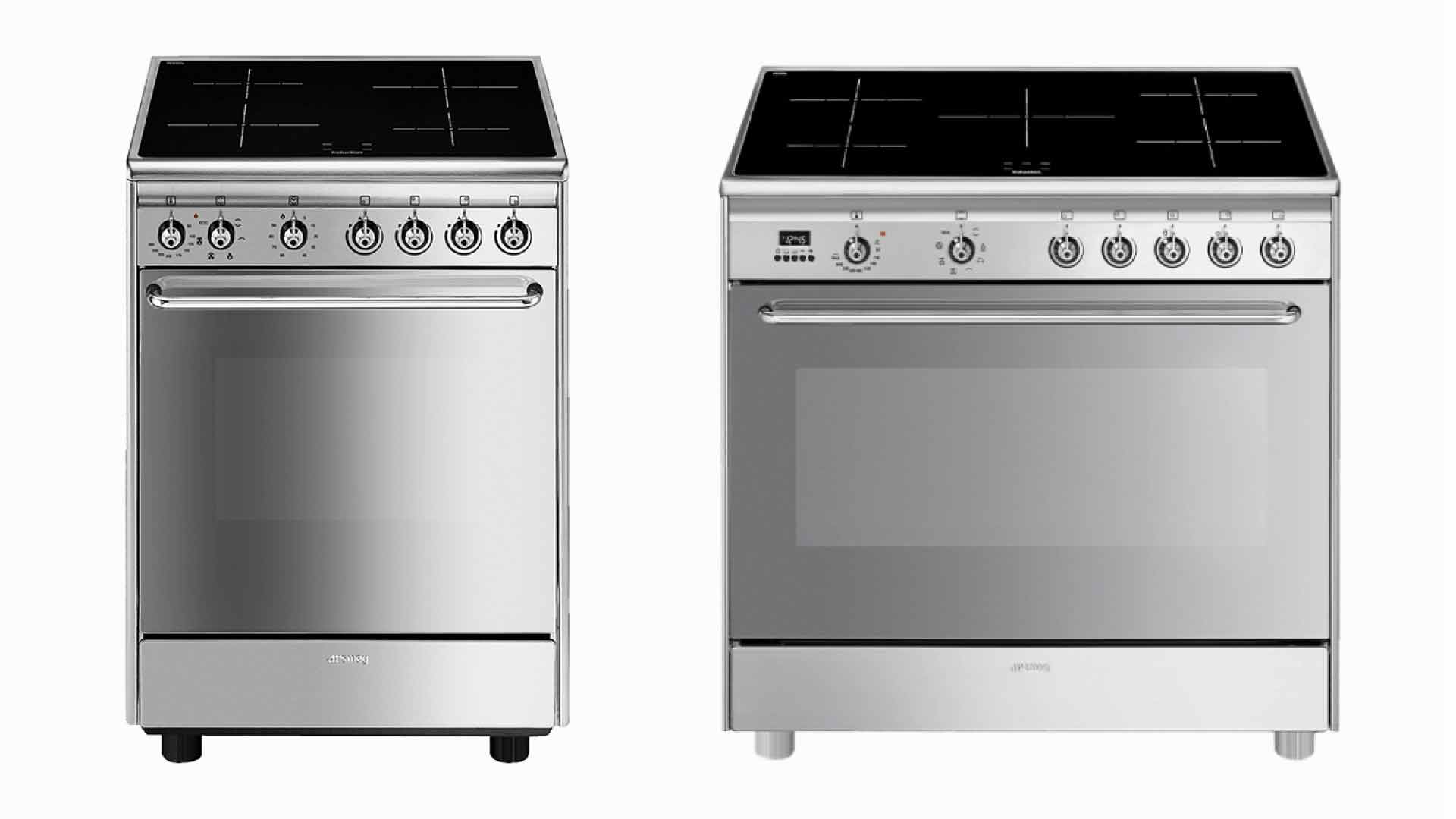 Similar to other Smeg ovens in the stainless steel series, the Concert 60cm is equipped with a Tangential Cooling System and Cool Door Technology. Combined, this means that the sides and the door of the range cooker stays cool despite the running oven.

For cleaning, the Vapor Clean function is available so you don’t have to work too much after you do the cooking.

Compared to the Concert 60cm, the wider Concert 90cm induction range cooker has one more induction zone, for a total of five.  It also has the capacity to increase the speed of heating with the Power Booster. It has a Thermo-Ventilated Electric Oven so while in operation, no air leaves or enters the cavity which is the secret to perfectly regulated temperature and even cooking. The net oven capacity is extra-large at 115 liters, so you can bake and roast as much as you want. 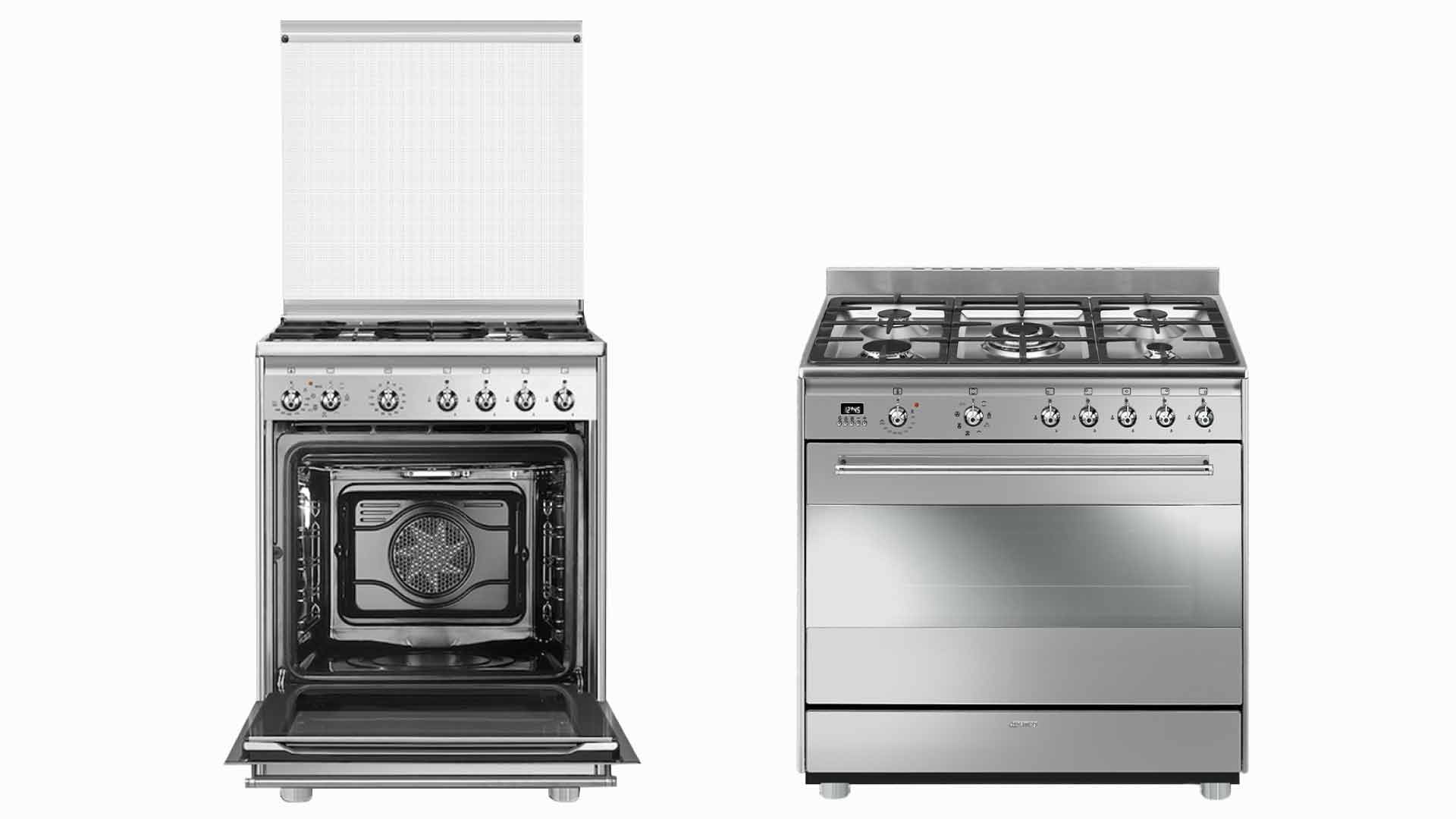 The Concert 60cm gas range cooker has four gas burners. It is equipped with a fan-assisted electric oven that has the Tangential Cooling System and Cool Door Technology. It also has the Vapor Clean feature.

For a wider option, there is the Concert 90cm gas hob with five gas burners, cast iron pan stand, and cast iron wok support. Its electric oven is Thermo-Ventilated with a net capacity of 115 liters.

Learn more about the Opera, Sinfonia, and Concert range cookers. Request for a product demonstration at any of the Smeg Experience Centers at Park Terraces in Makati or Design Center in Mandaue. Or shop online at www.smegphilippines.com. For inquiries, message the Smeg concierge at sales@smegphilippines.com or @smegphilippines on Instagram and @smegph on Facebook.